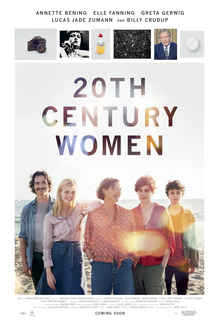 The story of three women who explore love and freedom in Southern California during the late 1970s.

Mike Mills last film, ‘Beginners’, led to an Oscar win for Christopher Plummer for playing a character based on Mills own father, who came out as gay in his 70s after his wife (and Mills mother) had passed away. In ‘20th Century Women’, Mills again returns to his own family history, with this film loosely based on his own upbringing and specifically on his relationship with his mother. Set in 1979, the film depicts a mother, Dorothea (Annette Bening), bringing up her teenage son, Jamie (Lucas Jade Zumann) with the help of three other people in an unconventional bohemian set up. Those people are handyman William (Billy Crudup), artist Abbie (Greta Gerwig) and one of Jamie’s friends and teenage crush, Julie (Elle Fanning). Mills film gets a lot of mileage out of these characters and how they interact, and I thought ‘20th Century Women’ was particularly impressive in how successfully it encapsulates its time period and its characters respective journeys.

The film is anchored by Annette Bening’s Dorothea, an open minded (sometimes to a fault) women with her own views and ideals about how to bring up her child in the world of 1979, pre-Reagan but post-Woodstock. Bening’s a terrific actress and she brings a lot of soul and heart to this character, and ‘20th Century Women’ is often at its best when it explores Dorothea’s inner thoughts, particularly when it comes to her relationship with Jamie. It has a lot to say about parenthood and its challenges, and it’s even handed in showing this from both Jamie and Dorothea’s point of views. The film’s characters often quote from literature of the time (these people are very much of this time period), and whilst this could often seem overly arty or twee, I actually thought it was fairly profound at times in helping to clarify the film’s themes. Beyond Dorothea and Jamie, Mike Mills script has a very strong handle on each of the main characters, who all get their own distinct and satisfying arcs that contribute to the whole experience, and I would happily have spent more time with these characters.

The setting and time period is enhanced by the evocative use of still shots (a technique Mills also used well in ‘Beginners’) and a great soundtrack which plays a major part in the story as opposed to merely functioning as pleasant background noise. This often feeds into a lot of the humour (there’s a great sequence of Dorothea and William trying to ‘get’ modern music) and I thought the film was really good at depicting people enjoying themselves and simply just living their lives. ‘20th Century Women’ is a funny and well written drama about intersecting lives at the end of the 1970s, and led by a typically great Annette Bening performance, I found this to be a really joyful and uplifting movie.