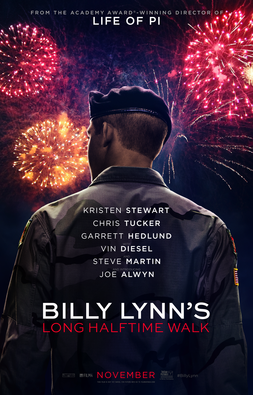 19-year-old Billy Lynn is brought home for a victory tour after a harrowing Iraq battle. Through flashbacks the film shows what really happened to his squad – contrasting the realities of war with America’s perceptions.

Billy Lynn is called a hero on many occasions, but he doesn’t really feel like one in Ang Lee’s latest film, centered on the experience of war on a young man’s mind. Bad, and literal title aside, ‘Billy Lynn’s Long Halftime Walk’ is a curious film that tries to tackle an ambitious and worthy topic without being wholly successful in doing so. The film follows the titular Billy Lynn, a young soldier who has returned from Iraq temporarily with his squadron, and we follow a day in his life which is planned to culminate with an appearance during the half time show at an American Football game. Throughout the day we learn about Billy as a person, about his experiences abroad, and about his status back home as a result of a viral video that depicts an act of bravery in the heat of battle.

Billy Lynn is played by newcomer Joe Alwyn, and it’s a remarkable debut in a flawed film. Alwyn conveys the innocence of youth with a hint of the scars of war, and it’s reminiscent of the finest performances from films like ‘Platoon’ and ‘Full Metal Jacket’ that dealt with the effects of war in a more focused and action orientated fashion. Alwyn’s performance is more internal, but I found him to be quietly moving and he really got under my skin. It’s clear he’s suffering from PTSD, depicted not so subtly but effectively by Lee’s direction, and the film’s most interesting commentary comes when it attempts to tackle this subject head on through the prism of the people surrounding the soldiers. The American war machine requires people like Billy Lynn to maintain support for its aims and to keep more young soldiers coming through the doors, and Ang Lee attempts to show how this is achieved through grand displays at sporting events and similar such publicity stunts. The film deconstructs the hero narrative America builds around its soldiers and the wars it fights, and that’s not to say Billy’s actions are not heroic – they are, but Lee is far more interested in touching on how America uses the bravery of young men to keep the momentum rolling, with limited interest in the young men as people.

Throughout the film, Billy and his squadron are paraded around as heroes, congratulated by strangers and treated to experiences they wouldn’t have got if they hadn’t gone to war. There’s talk of a movie deal based on their time in Iraq, with the character based on Billy likely to be the lead, and this brings in a variety of characters such as Chris Tucker’s movie producer and Steve Martin’s rich, football team owner. All of these people talk outwardly about the heroism of the young men and how they’re a credit to the country and how they want to congratulate them, but actions speak louder than words and I was impressed with Lee’s approach to getting his themes across. Only one character in the film recognises that he’s suffering (his sister played by Kristen Stewart, underused), whether purposely or not, but it becomes clear that many of the film’s characters want to give the illusion of supporting the troops, so far as it furthers their own aims, with little consideration for the impact that has on troubled, young men. This is depicted superbly at the film’s primary sequence, the halftime show itself, as the soldiers are paraded in front of thousands to a song and dance routine by Destiny’s Child with no concern paid to how they react too the various effects, bright lights and loud noises surrounding them. In many ways it’s another form of exploitation, just in a more superficial and corporate sugar coated way than on the battlefield.

‘Billy Lynn’s Long Halftime Walk’ hasn’t been received particularly well, but I think it’s a better film than it’s been credited for. I think Ang Lee’s intentions are earnest, but the film is slightly uneven and the stronger moments are weighed down by a lengthy opening that struggles to clarify the film’s themes. There’s also been some discussion on the film’s frame rate (Lee chose to shoot in 120fps, more than the 48fps of ‘The Hobbit: An Unexpected Journey’, for comparison), but I suspect my screening was in the standard 24fps as I wasn’t aware of anything different. I do think it’s an interesting piece of work and there’s some really some moments, so I’d recommend not totally dismissing it if the premise (or maybe even this review!) have piqued your interest.