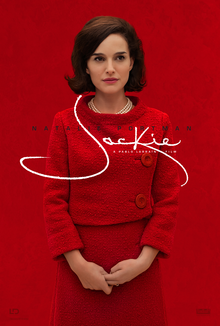 Following the assassination of President John F. Kennedy, First Lady Jacqueline Kennedy fights through grief and trauma to regain her faith, console her children, and define her husband’s historic legacy.

‘Jackie’ is not the film I was expecting it to be. At its heart, ‘Jackie’ is a biopic of the iconic first lady, but it doesn’t follow a traditional path and it would be better described as an intimate portrayal of a person going through the immediate stages of grief. Beyond the framing device of an interview with a reporter, the film arrows in on a short spell in Jackie Kennedy’s life, in the days that followed her husband’s assassination in November 1963. It begins in the immediate aftermath of JFK’s murder and Chilean director Pablo Larrain does a phenomenal job of emphasising the claustrophobic and chaotic feel of the situation Jackie Kennedy finds herself in.

Larrain’s approach focuses more on style than on story, trusting that his audience know the details of the event he is portraying already, and it works incredibly well. He does so primarily through his camerawork and the use of extreme close ups that put the audience right in the headspace of the characters he is depicting. Almost every moment is witnessed through Jackie’s viewpoint and we can feel her world tumbling down as she tries to come to terms with the most tragic of circumstances. Another smart move is to sideline JFK, who only ever appears through Jackie’s eyes, and this makes it abundantly clear that this is her story, and not his. There are many powerful moments in the film, but none moreso than a phenomenal sequence in the presidential aeroplane when Lyndon B. Johnson is sworn in, surrounded by various advisors, and Jackie sits alone in her thoughts, present but emotionally distant from the events happening around her. It’s one of many moments that are beautifully played by an outstanding Natalie Portman, and summises many of the film’s themes about how one copes with grief in a vacuum.

The loud, organ driven score is also incredibly effective at creating the film’s tone, which approaches operatic at times as the camera dances around Jackie at various moments in the days after JFK’s death. The film is visceral in its approach, but I never felt it became exploitative, both in its depiction of the assassination itself or in its exploration of Jackie’s grief in the days following. This is largely helped by the searing portrayal from Natalie Portman which is deeply personal and full of sorrow. I thought ‘Jackie’ was a moving and powerful portrayal of grief and Pablo Larrain’s approach in tackling the subject matter was very effective, and this is a film worth seeing.