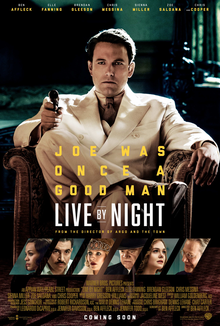 A story set in the Prohibition Era and centered around a group of individuals and their dealings in the world of organized crime.

At this time of year, it’s inevitable that perfectly acceptable films such as ‘Live by Night’ will be given a harsher treatment than they would have done at other times of year. Released in the UK against the excellent award favourites ‘La La Land’ and ‘Manchester by the Sea’, ‘Live by Night’ suffers by comparison, but it’s not a bad film, but nor is it the great film it aspires to be. Ben Affleck’s carved out a strong career to date behind the camera, with the Oscar winning ‘Argo’ his latest release in 2012. ‘Live by Night’, his second Dennis Lehane adaptation after ‘Gone Baby Gone’, is a solid gangster movie but it suffers because of its ambition and it fails to avoid falling into the well worn clichés of the genre.

Affleck stars as well as directs as Joe Coughlin, a WWI veteran who we join up with as he’s robbing banks and local card games which attract the attention of two rival crime bosses. His father is a police captain (Brendan Gleeson) and he’s sleeping with the mistress, Emma (Sienna Miller), of one of these local crime bosses, Albert White (Robert Glenister). The opening scenes are ridiculously clichéd, from an overused voiceover to gangster movie tropes at ten a penny, and that’s before the depiction of Joe and Emma’s courtship which seems to take place primarily in the open, and that doesn’t seem wise nor realistic for someone having an affair with a gangster’s partner. Unsurprisingly this is discovered by White’s rival and Coughlin’s given a difficult choice to make. It’s stressed on several occasions that Joe is a good man drawn into a life of crime, but actions speak louder than words and I could only see a bad man doing increasingly bad things as he developed a taste for the lifestyle. Fortunately, the film steps up a gear once Joe inserts himself into the gangster lifestyle and the film is really enjoyable once it moves the action away from Boston to the more exotic locales of Tampa, Florida.

‘Live by Night’s main problem is it’s written and directed with ambitions of being another in a long line of sweeping gangster epics, and it simply fails to live up to those standards. Another problem which ties into this is Joe Coughlin himself, who we can tell Affleck loves a lot more than the audience are likely too. Joe’s not an interesting enough character to carry the narrative by himself, but Affleck inserts himself into nearly every scene and he lacks the conviction or courage to depict Joe purely as the bad person he undoubtedly is. This comes through in a couple of key scenes where tough decisions are glazed over in service of retaining the idea that Joe has a core of decency underneath and an element of morality. I did feel Affleck was a little miscast as well, and I say this as someone who generally likes Affleck as a performer, but I just didn’t buy him as this all conquering gangster who’s always one step ahead of the competition. In terms of the support, he’s amassed a talented cast but only the always excellent Chris Cooper is given much depth or room to develop and many potentially interesting subplots are brushed under the carpet almost as quickly as they’re introduced.

The strongest moments of the film come when it delivers some action and all of the main set pieces in the film are thrilling and extremely well directed. Affleck’s already shown a talent for this with ‘The Town’ in particular, and there’s another great bank robbery here, but the pick of the bunch is a stunning, gripping conclusion in a hotel that is incredibly effective. This is Affleck’s weakest film to date, but I still thought ‘Live by Night’ was an enjoyable gangster movie and it’s worth seeing despite the disparaging reviews.