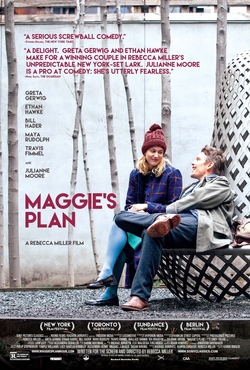 Maggie’s plan to have a baby on her own is derailed when she falls in love with John, a married man, destroying his volatile marriage to the brilliant Georgette.

‘Maggie’s Plan’ is a screwball comedy from Rebecca Miller which takes the basis of a standard romantic comedy and flips some of the conventions on its head. The film is about the titular Maggie (Greta Gerwig), a single New Yorker in her early 30s who has a hankering for a baby, and we join her as she’s looking into alternative means to make this happen as opposed to the conventional method. The opening scenes are light and witty and Miller skilfully introduces the key players in a way that doesn’t feel forced, setting up the premise and the drama that will ensue throughout the film’s runtime. The other key players beyond Maggie are a couple of married academics, John (Ethan Hawke) and Georgette (Julianne Moore), who end up involved with Maggie when she begins an affair with John.

The film feels very similar to the work of Noah Baumbach, not just in the use of Greta Gerwig or New York, but in the style and tone of the work that takes an offbeat view on an unusual situation. I did feel that the script didn’t do as much as it could with an intriguing premise and the conflicts when they arise are solved far too easily, albeit there’s plenty of humour involved in getting there. In terms of the performances, I wasn’t as sold as I expected given the talent on offer, and I found Julianne Moore to be particularly disappointing in large part down to an offputting accent that adds little to the character. Greta Gerwig is an actress I generally like but something feels a bit off with her performance here, almost like she’s playing a caricature of her best roles and not a compelling character in her own right. The most enjoyable performances come in the supporting roles, with Bill Hader, Maya Rudolph and Travis Fimmel all excellent as they stand on the sides and watch the madness at the centre of the film unfold.

‘Maggie’s Plan’ is an amusing watch at times, but it’s not consistently funny or dramatic throughout and I felt it took too long to get into the truly engaging aspects of its premise and its story. Whilst I enjoyed it overall, it did just make me wish I was watching a Noah Baumbach movie instead!