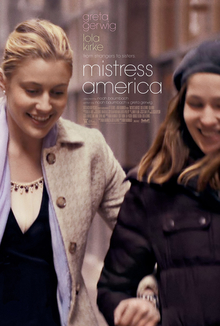 A lonely college freshman’s life is turned upside down by her impetuous, adventurous soon-to-be stepsister.

Noah Baumbach follows up the excellent ‘While We’re Young’ with his second film of the year, focusing on many of the same themes with a witty script and strong performances from his lead actresses. Like his last two films (‘Frances Ha’ and ‘While We’re Young’), ‘Mistress America’ works on several different levels, touching on a variety of different themes in its short runtime. It’s a story of a girl going off to college and struggling to fit in. It’s a story of a 30 year old struggling to grow up and come to terms with ‘real life’, and on a looser level it’s a story about money and risk taking and how succeeding at life isn’t as simple in practice as in theory. Baumbach’s keen observational eye for human behaviour is on show here and this works well as a companion piece to ‘Frances Ha’ in particular.

The film tells the story of Tracy (Lola Kirke), an 18 year old girl struggling to fit in at her new college and the friendship she forms with her stepsister to be Brooke (Greta Gerwig), complicated by various factors in both of their personal lives and in the unusual circumstances in which they met. Lola Kirke is a talented young actress and she’s a good fit for Baumbach’s world, acting as the more grounded character to Greta Gerwig’s Brooke. Like her performance in ‘Frances Ha’, Gerwig has a manic presence that energises the film and she manages to take a character that could be annoying in the wrong hands and make her endearing. Gerwig co-wrote the script with Baumbach and her character gets most of the best lines, although an enjoyable supporting cast also make best use of the humorous script and witty observations. There’s a spirited rhythm to much of the dialogue as it bounces around every character in the room and ‘Mistress America’ is at its strongest in a comical sequence at Brooke’s old boyfriend’s expensive country mansion, where the screwball elements of the script come to the fore.

The film is keenly concerned in bringing out the everyday anxieties and concerns of its characters and treating them all with respect and focus, no matter how trivial they appear. In lesser hands we’d see narcissistic and privileged New Yorkers who don’t know how lucky they are, but ‘Mistress America’ is more perceptive than that and it avoids painting its core characters in overly broad strokes. ‘Mistress America’ is another smart observational comedy from Noah Baumbach and he’s on a real hot streak right now – recommended.