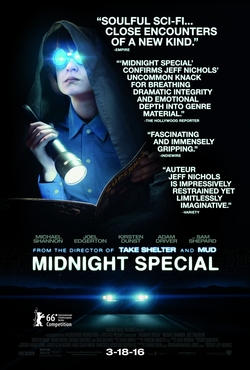 A father and son go on the run, pursued by the government and a cult drawn to the child’s special powers.

‘Midnight Special’ is a gripping chase movie with science fiction elements, directed by the talented Jeff Nichols. The film drops us right into the action as a protective father (played by Nichols regular Michael Shannon) escapes from a cult with his son, Alton (Jaeden Lieberher), aided by an old friend (Joel Edgerton). It soon becomes apparent that Alton is no ordinary boy and his special abilities render him both a prize and a danger to several groups of people, including the cult and the authorities. The film is a slow burn and it does take time to immerse yourself in the story, but it’s so impeccably presented and beautifully mysterious that I was gripped from the outset.

I’ve yet to see ‘Shotgun Stories’, Jeff Nichols debut, but I loved his two previous films ‘Mud’ and ‘Take Shelter’, both of which were grounded films with an element of mystique about them. In that respect it’s no surprise that Nichols has taken the next step into making a science fiction movie and you can see the influences from the likes of ‘Starman’, ‘E.T.’ and ‘Close Encounters of the Third Kind’ in ‘Midnight Special’. Despite the grander and more superlative themes, ‘Midnight Special’ is remarkably restrained and remains true to the type of stories Nichols has told in previous films without sacrificing on imagination. For most of the runtime the science fiction elements are downplayed and remain on the fringes of the story, yet the brief bursts are thrilling interventions in the narrative. At its heart, this is a film about the connection between a young boy and his father and the science fiction elements serve to heighten the stakes without sacrificing the emotional depth of the bond.

Michael Shannon is one of the most compelling actors in the business and he’s outstanding once again here, whilst Jaeden Lieberher (so good opposite Bill Murray in ‘St. Vincent’) delivers a special child performance that remains natural and down to earth despite his character being anything but. The supporting cast is uniformly great, from the likes of Adam Driver as a sympathetic NSA agent to a stripped back Kirsten Dunst as Alton’s mother. The presentation of the film is key to immersing you in the fascinating story and this is emphasised by the terrific cinematography and a magnificent and suitably atmospheric soundtrack from David Wingo. The key challenge a lot of high concept films struggle with is in how to nail the landing and ‘Midnight Special’ more than delivers on that front with a conclusion that is uplifting, exciting and genuinely moving, even if the influence of ‘Close Encounters of the Third Kind’ resonates strongly.

‘Midnight Special’ is a gripping, imaginative thriller with a science fiction edge and it’s further evidence that Jeff Nichols is one of the most exciting new voices in the business.