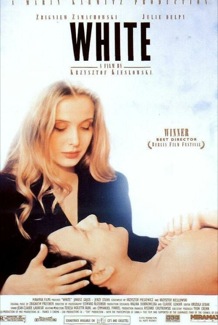 Second of a trilogy of films dealing with contemporary French society shows a Polish immigrant who wants to get even with his former wife.

The second film in the ‘Three Colors’ trilogy builds on the themes developed in the first film by telling a new story that only loosely connects with the story of Juliette Binoche’s widowed Julie as told in ‘Three Colors Blue’. There’s more of a plot to ‘Three Colors White’ and I particularly enjoyed the blackly comedic tone that resonates throughout, even if the narrative is less plausible and more absurdist. The film focuses on the theme of equality as an emasculated man hatches an elaborate plan to get revenge on the wife who humiliated him and forced him to leave France. It’s not as thematically strong a link as in ‘Blue’ but there’s a lot to appreciate and enjoy in how it plays out.

We begin this film as we left the last one, in a Paris courthouse, as Karol (Zbigniew Zamachowski) is being divorced by his wife Dominique (Julie Delpy). Karol is a Polish immigrant and understands little French, with a translator relaying the reasons for the divorce to him. These reasons include a series of humiliating revelations beginning with Karol’s inability to consummate the marriage and concluding with Dominique revealing she no longer loves him. To continue Karol’s bad day, he loses the salon he jointly owned with Dominique, his legal residency in France and in a comically tragic series of events, the remainder of his money rendering him homeless and begging on the streets. With the help of a man he meets at a train station, Karol gets back to Poland where he begins to set his plan for revenge in motion.

Zamachowski is an unassuming presence as Karol and he expertly depicts the growth in confidence as Karol starts to become more comfortable in his own skin once he’s back in Poland, whilst Janusz Gajos is excellent as Mikolaj, a fellow Pole Karol meets at a Paris train station. In terms of links with the other films in the trilogy, we once again see an older person using a recycling bin, on this occasion a man who struggles to reach high enough as Karol watches on. Like ‘Blue’, Kieslowki makes good use of the titular colour with frequent shots of the white sky, the use of snow in Poland and a white tint on some of the camerawork to reinforce the point. As with the narrative, the use of colours feels less obvious than in ‘Blue’ from a thematical perspective but I don’t think the film suffers for it.

As previously mentioned, ‘White’ is more heavily plotted than the thoughtful and distant ‘Blue’ and it plays out in an interesting and strangely satisfying way. Widely regarded as the weakest of the trilogy, I enjoyed it nonetheless and I’m looking forward to catching ‘Red’, the final piece of Kieślowski’s final cinematic puzzle.