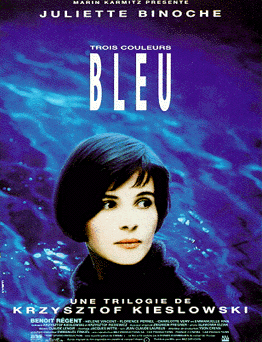 A woman struggles to find a way to live her life after the death of her husband and child.

We return to our retrospective strand with a mini series looking at acclaimed Polish director Krzysztof Kieslowski’s ’Three Colors Trilogy’. This trilogy turned out to be his final films due to his untimely death in 1996 and have gone on to be regarded amongst his finest work. Set in France and focusing on the French revolutionary ideals of liberty, equality and fraternity, the three films in the trilogy tell different stories linked by similar themes. The first in the series is ‘Blue’, a slow burning film about a woman coming to terms with life after she survived a car accident which claimed the lives of her husband and daughter. The film follows Julie, played by Juliette Binoche in an early role, as she tries to cut herself off from her previous life to live in isolation, which proves harder than she expects.

Julie’s husband was the famous composer Patrice de Courcy and one of the recurring threads throughout the narrative is his music, which haunts Julie internally, as well as playing a key part on the surface as Olivier, one of Patrice’s collaborators wishes to complete his final piece of work. Julie’s intention is to escape from the past but the music continues to follow her (it’s heavily hinted that Julie played more than a supporting role in the compositions) and the bond she forms with Olivier presents an even greater challenge to overcome. Kieslowski uses a variety of techniques to evoke the feeling that Julie can’t truly escape her past, with recurring heavy orchestral music and the use of visual cues such as a lamp of blue beads. Much of the film is shot with a blue tint on the camera, on one hand to reflect the film’s title but more to illuminate Julie’s face at particular points of reflection and it has a disorientating effect. As Julie starts to move past the trauma the colours move from darker tones to lighter and whilst this isn’t the subtlest approach, it’s undoubtedly effective.

It’s a very thoughtful film and I found it particularly difficult to get into at the beginning, but once the story starts to come together there are rich rewards to be found here. The film is very European by design, focusing on small scale drama at the expense of big dramatic revelations and it’s satisfying to see small moments from the early part of the film bear fruit later on. This is all helped by the mesmerising performance from Juliette Binoche, who fully embodies a woman who has gone through a traumatic experience and doesn’t really know how to respond or how to move on. Binoche’s performance suggests a curiosity within Julie about how to approach life after everything she has built has been destroyed and her growth throughout the film is quietly compelling. Later on in the film, revelations about her husband’s life are treated more with a shrug than anger, and if anything it helps to steel Julie’s resolve towards accepting her situation and taking back control of her life.

Overall I found ‘Three Colors: Blue’ to be an engaging, small scale drama, driven by an excellent performance from Juliette Binoche and strong direction from Kieslowski. I’ll look forward to checking the next two films in the series out.