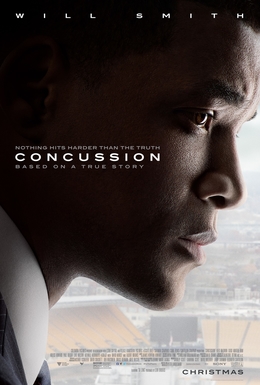 In Pittsburgh, accomplished pathologist Dr. Bennet Omalu uncovers the truth about brain damage in football players who suffer repeated concussions in the course of normal play.

‘Concussion’ is the story of the doctor who discovered the medical condition CTE in several deceased NFL players, and his battle for it to be recognised by the footballing authorities. The film begins by introducing us to Dr. Bennet Omalu (Will Smith), a Nigerian immigrant working as a forensic pathologist in the Pennsylvania coroner’s office. Omalu is a bit of a strange fish with a fascination for the deceased, who he talks to whilst examining their bodies, but he is undoubtedly a talented and innovative investigator. When former NFL player Mike Webster (David Morse) is found dead in his pickup truck at 50, ostensibly from a heart attack, Omalu’s autopsy discovers severe brain damage caused by the long term effects of repeated blows to the head. These symptoms match the diagnosis for CTE (chronic traumatic encephalopathy), a condition most commonly found in former boxers. Discovery of further cases in more NFL players leads to Omalu going up against the powerful and rich NFL to raise awareness of this condition.

Once you get past Will Smith’s dodgy Nigerian accent, his performance is mostly strong and he handles the material with an understated intensity that allows the story to breathe around him. He’s ably helped by a good supporting cast, with Albert Brooks, Alec Baldwin and Gugu Mbatha-Raw the most prominent as key confidantes and supporters. This is a story worth telling and watching Omalu constantly being rebuffed by senior NFL officials is a frustrating example of power and money being used to ignore important research that will improve safety and people’s lives. It’s testament to Omalu’s convictions that he continues with his research and doesn’t give up until his findings are taken seriously.

Where I found the film to be disappointing was in its tendency to conform to traditional narrative structure for this type of film, and coming out at this time of year does tend to highlights its attempts at getting into the awards conversation. It’s not that the film is bad in any way; this is a solid drama with good performances but the tendency to take a weighty subject about an important issue without straying from formula will rightly or wrongly level criticisms of Oscar-bait. The opening sequences particularly highlight this, with James Newton Howard’s overbearing and mawkish score hammering home that this is an ‘important’ movie about an ‘important’ issue. Peter Landesman’s previous film, ‘Parkland’, about the JFK assassination also took a weighty subject and struggled to deliver anything fresh or original, and whilst the story of ‘Concussion’ hasn’t been told on screen before, the material feels well trodden.

Overall, ‘Concussion’ is a good drama about an issue worthy of discussion, but it plays it too safe to achieve anything approaching greatness.