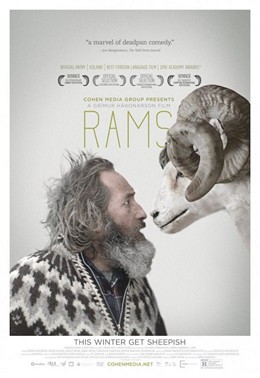 In a remote Icelandic farming valley, two brothers who haven’t spoken in 40 years have to come together in order to save what’s dearest to them – their sheep.

‘Rams’ is an oddball comedic drama from Iceland focusing on two bickering brothers who have to come together after their communities flock of sheep are threatened by a deadly disease. Gummi (Sigurður Sigurjónsson) is our protagonist, a sheep farmer in a rural farming valley in Iceland who lives alone just down the road from his brother Kiddi (Theodór Júlíusson), also a sheep farmer. The brothers barely communicate, choosing to send messages and notes via Kiddi’s dog, and their conflict is brought to light when Kiddi’s ram wins an annual competition ahead of Gummi’s. If this sounds ridiculous then it kind of us, but the script also has a lot of compassion for the challenging lifestyle these people have where the sheep are their one and only concern.

The thrust of the narrative focuses on the discovery of a dangerous hereditary disease in some of the local sheep, leading to the local authorities ordering a complete slaughter to ensure the disease is killed off. This will affect the farmers livelihood’s immensely, not to mention the effect on them of losing animals they are deeply attached too. Gummi’s initial reaction seems one of resignation as he takes care of his flock himself, but the viewer, like the authorities, may underestimate Gummi at their peril. Despite the bleak setting the film becomes funnier as time goes on and director Grímur Hákonarson’s script delivers black comedy in droves.

What we end up with is a strange marriage of bleak social realism and absurdist comedy and for the most part it works. The direction of the plot isn’t exactly unexpected but it creates several amusing scenarios, mostly delivered by the superb deadpan work of Sigurjónsson as he tries to keep his response to the crisis secret. Júlíusson is good too as the drunk and aggressive Kiddi and the film gets as much mileage out of the brother’s eventual partnership as they did out of their conflict. The film moves towards an ending that feels kind of abrupt and unresolved, which is disappointing, but for a short 90 minute film, ‘Rams’ is an unusual, bizarre and enjoyable experience that you couldn’t imagine being made in any other country.