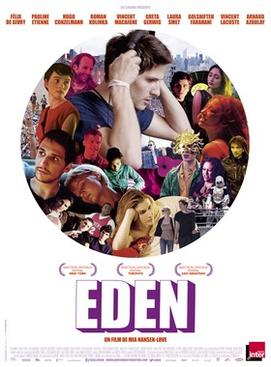 Paul, a teenager in the underground scene of early-nineties Paris, forms a DJ collective with his friends and together they plunge into the nightlife of sex, drugs, and endless music.

‘Eden’ is a French film that follows the story of Paul, a DJ who discovers the French house music scene in the early 90s and starts to make headway with a variation on the sounds of Chicago’s garage house. Paul is our viewpoint into this world, and we follow him over the course of the film as he follows his dream, and as friends and lovers come and go, his passion for music remains the same. Directed by Mia Hansen-Løve, and based loosely on her brother Sven’s experiences, the film is a terrific insight into the hedonistic lifestyle of a house music DJ, graphically portraying the sex, drugs and the music that drive these people to come back night after night. ‘Eden’ follows Paul’s journey as he goes from one of the hip youngsters to a guy past his prime, still spinning records that went out of vogue years earlier, and it starts to question whether Paul should continue leading this life.

The film takes a while to get into, with most of the early sequences standoffish in introducing the characters, mainly letting the viewer get to know them through their interests and through their shared passion for dance music. Once the film starts to develop the relationships further it reaches a higher level and we start to see the film exploring Paul’s place in an environment where he’s no longer the hip up and comer. The choice between a steady life and the exciting buzz that DJing gives him is not an easy one, but it’s a choice that comes to many that can’t earn a living out of the lifestyle. There’s a nice juxtaposition between Paul’s trajectory and that of Daft Punk, who feature intermittently throughout the film, spending time with our protagonists as youths before their career really took off. I particularly liked the footnote to this aspect of the film when Paul is talking to a girl from his writing class who mentions that she doesn’t really like that kind of music, but she likes Daft Punk. It’s a clever piece that emphasises the fine lines involved in making a successful career out of the music business.

The film as you may expect features a terrific soundtrack that really throws you into the experience of the main characters, truly replicating the pulsating atmosphere of a busy club. The film does makes a couple of stylistic misstep with two scenes where Paul reads a letter and a piece of poetry from a couple of girls, where the director makes the choice to show the actor reading each piece like a monologue to the camera. It takes you out of the moment and isn’t in sync with the filming style of the rest of the film, and the film would have better without these choices. The performances are strong throughout, from Félix de Givry in the lead role as Paul, to the heart of the film in Pauline Etienne’s Louise. More than anything, ‘Eden’ is a thrilling journey into the midst of the French house music scene of the 90’s and 00’s, showing a group of friends trying to make a living out of the music they love. Perhaps it’s notable that as they grow older and the passion for music subsides, these characters drift apart and go their separate ways.