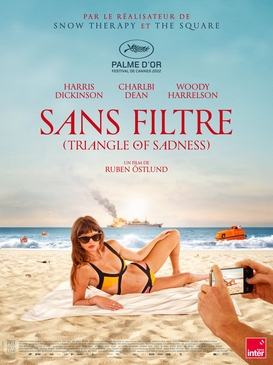 A fashion model celebrity couple join an eventful cruise for the super-rich.

Ruben Östlund joined the ranks of only 8 other directors when he claimed his second Palme d’Or at Cannes earlier this year for his latest satirical black comedy ‘Triangle of Sadness‘, following on from ‘The Square’ in 2017. Where ‘The Square’ took aim at the absurdities of the art world, ‘Triangle of Sadness’ has a more straightforward target in the super rich, many of whom are gathered on a luxury cruise aboard a superyacht, where much of the movie takes place. The movie follows the cruise experience and looks at the hierarchy of power, driven by money and status, that dictates how the wealthy passengers treat the waiting staff, and in turn how the waiting staff treat those staff members deemed lower down the food chain than them (cleaners, engine staff etc), with the exploration of this leading to some darkly comedic situations.

Our primary viewpoint into this world is through model Carl (Harris Dickinson) and influencer Yaya (the late Charlbi Dean), who have been invited on the cruise in exchange for promoting it on social media. The other guests include a Russian oligarch (Zlatko Burić) and his wife, a lonely tech billionaire (Henrik Dorsin) and an elderly couple who are wealthy on account of manufacturing weapons, or helping to ‘uphold democracy’ as the gentlemen puts it. We also spend time with the drunken ship captain (Woody Harrelson) and two key staff members, one who is head of staff (Vicki Berlin) and one who works on the cleaning staff (Dolly de Leon). Östlund likes to pit these characters from different backgrounds together, using it as a basis to dig into their morals or lack thereof, never shown better than in a comical political discussion between Harrelson and Burić’s characters – or the Russian capitalist and the American communist as they describe one another.

Östlund is a master of exploring the absurdities and intricacies of human nature and how our behaviour alters in certain social situations, and dependent on the person or type of people we’re interacting with, and that is at the heart of ‘Triangle of Sadness’. It perhaps lacks the pointed edge of his previous films (to include ‘Force Majeure’ with ‘The Square’), primarily as the super-rich are quite an obvious target and we aren’t lacking in media pointing out how awful some of them can be (‘Succession’, ‘The Menu’), but that takes little away from how well crafted this is. You may have already read about one particularly gross sequence that follows a fine dining dinner whilst the ship is being battered by the conditions, which is simultaneously hilarious and disgusting, but much of the highlights come in the smaller moments that provide some dark laughs.

‘Triangle of Sadness’ isn’t quite as brilliant as Östlund’s last two films, but it is a terrifically entertaining black comedy about power dynamics, wealth and the world we live in today.