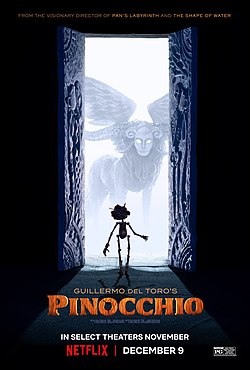 A father’s wish magically brings a wooden boy to life in Italy, giving him a chance to care for the child.

Guillermo del Toro’s take on the tale of ‘Pinocchio’ is the third such movie in only a couple of years, following on from Matteo Garrone and Robert Zemeckis’s live action adaptations. Del Toro’s movie is in stop-motion animation, and is a decidedly darker take on a story known best to most through Disney’s 1940s animation, setting his story in the 1930s and bringing the onset of fascism in as a key theme that impacts on Pinocchio’s story. It is a story that del Toro has been attempting to bring to the screen for a while, and he considers it apiece with his earlier dark fantasy movies such as ‘Pan’s Labyrinth’ and ‘The Devil’s Backbone’.

I’m sure most of you will be familiar with the story of ‘Pinocchio’, and in terms of the main beats of the story, this adaptation doesn’t veer too much. We still have Jiminy Cricket (narrating, voiced by Ewan McGregor), the sequence with the whale, and Pinocchio’s time with the carnies, and it does retain much of the heart in the relationship that forms between Geppetto (David Bradley) and Pinocchio (Gregory Mann) himself – aided by a bit of additional heartbreaking backstory. Overall though, I didn’t really connect to this version of ‘Pinocchio’, and felt it was lacking not only against the Disney classic, but against Matteo Garrone’s recent Italian language version, which for me is the clear standout of the three recent versions. I don’t doubt that it has borrowed from the source material’s darkness (often glazed over in other films), and it certainly looks great, but I felt if anything they detracted rather than added from the core of the story.

In taking a more personal and darker view on the story of ‘Pinocchio’, Guillermo del Toro has at least tried to do something original with an oft-told tale, but for this viewer at least, that didn’t lead to a stronger movie overall and I found this to be a fairly average adaptation of ‘Pinocchio’.