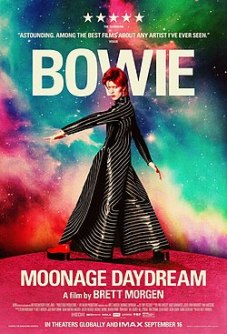 David Bowie was one of our most unique and influential artists so it is only appropriate that a documentary about him invokes that spirit of originality. In ‘Moonage Daydream’, a whirlwind of sound and vision (yes, pun intended), director Brett Morgen more than steps up to the task to create an immersive experience that takes us through the life and career of the genius that is and was David Bowie. It is helped by the support of the Bowie estate, which granted Morgen access to an extensive archive of over five million items, providing him with all the tools he could possibly need to create this movie.

This is a documentary, but it is closer to pure cinema than what we would expect from a traditional documentary – there’s no talking heads or techniques we’d tend to associate with a biopic documentary. Instead, we have a series of clips and images of Bowie performing, travelling and creating his art (both musical and otherwise), mixed together with random clips from movies and art that influenced him. It all comes together in an intoxicating mix, tied together by philosophical narration taken from previous Bowie interviews, which fits seamlessly with the imagery displayed on screen. Bowie’s changing style over the years negates the need for clear markers of the timeline, but it broadly moves in a linear way through Ziggy Stardust to the Thin White Duke, to the more toned down persona he adopted in his later years. Through this approach it allows us to both follow Bowie’s career whilst also gaining insight into his mindset and thought process at different stages of his life.

There have been previous Bowie documentaries, and one biopic (‘Stardust’, which was a flop in part because it featured no actual Bowie music), but none of them have came close to encapsulating who Bowie was and what he meant like ‘Moonage Daydream’ does. Unconventional and unique in all the ways we came to expect from David Bowie, ‘Moonage Daydream’ is a glorious visual treat befitting of the man it pays tribute to.