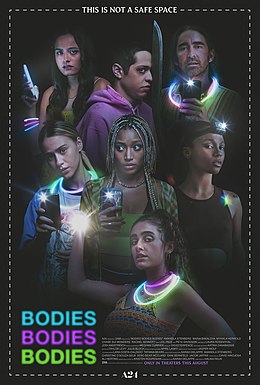 When a group of rich 20-somethings plan a hurricane party at a remote family mansion, a party game turns deadly in this fresh and funny look at backstabbing, fake friends, and one party gone very, very wrong.

The English language debut from Dutch director Halina Reijn, ‘Bodies Bodies Bodies’ is an entertaining blend of black comedy and horror about a group of young adults who find themselves being murdered one by one in the mansion they’re staying in during a hurricane. The characters are pretty much all intentionally insufferable, rich, spoilt and vain and the friendships they have with one another are barely even surface deep – perfect fodder for accusing each other of murder when things escalate! The approach to the story is to essentially to update Agatha Christie’s classic murder mystery ‘And Then There Were None’ for the modern age, with self centred and social media obsessed young adults the victims, and I thought for the most part it delivered a really entertaining movie.

We’re introduced to the ensemble at the start of the film primarily through the viewpoint of Bee (Maria Bakalova, playing a relatively ‘straight’ role after her Oscar nominated comedic performance in ‘Borat Subsequent Moviefilm’), the latest girlfriend of Sophie (Amandla Stenberg). They’re going to Sophie’s friend David’s (Pete Davidson) house for a ‘hurricane’ party, where they’ll essentially sit in his parents large mansion, drink and take drugs, whilst the impending hurricane ravages their surroundings. In the opening few scenes we’re introduced to the rest of the group which includes Sophie’s ex Jordan (Myha’la Herrold), their friend and David’s girlfriend Emma (Chase Sui Wonders), as well as Alice (Rachel Sennott) and a guy she met on a dating app two weeks earlier, Greg (the always wonderful Lee Pace). It doesn’t take long to realise they are all self centered and narcissistic with simmering resentments about each other that inevitably start to come to the surface once the killing starts.

This comes to the fore most when the central conceit is introduced, which is a game called ‘Bodies Bodies Bodies’ where all the lights are turned off, someone is assigned the murderer, and they have to tap someone on the back to ‘murder’ them. Everyone then has to guess who they think the ‘murderer’ is. A fairly harmless game on the face of it, until that is one of the group ends up dead, turning the remainder against each other as they try to work out who did it. The script is smartly written and the central whodunnit unfolds cleverly, with the social satire about upper class rich kids mostly landing well and delivering a lot of laughs. Some of the dialogue does feel a little try-hard at times in its attempts to get in certain buzzwords (triggered etc), but it’s such a pacy and entertaining movie that I’m willing to look past that.

‘Bodies Bodies Bodies’ is a sharp whodunnit with a talented cast, well directed with a script that delivers thrills, laughs and some smartly observed barbs on the nature of young adults and friendship in the digital age.