The Quiet Girl (An Cailín Ciúin) 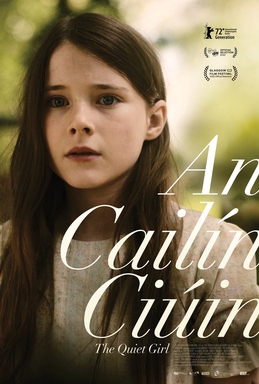 RURAL IRELAND. 1981. A quiet, neglected girl is sent away from her dysfunctional family to live with foster parents for the summer. She blossoms in their care, but in this house where there are meant to be no secrets, she discovers one.

‘The Quiet Girl’ as its title suggests, is a quiet little movie about a shy young girl who experiences a loving home for the first time in her life, when she moves in with some relatives on a farm during the summer. Set in 1981, it follows nine-year-old Cáit (Catherine Clinch), who lives in rural Ireland with her parents and siblings. Her parents are poor and neglectful to their children, particularly Cáit who receives the worst abuse on account of being quiet and withdrawn, leading to her parents deciding to send her to their distant cousins after her mother becomes pregnant again.

Cáit takes her time to adapt to her new surroundings but she does start to bond with the kind and caring Eibhlín (Carrie Crowley), who takes her time with Cáit and helps coax her out of her shell. It takes a little longer with Seán (Andrew Bennett) but he also starts to develop a bond with her and the pair become somewhat surrogate parents for her, the antithesis of how she was treated by her own parents. This is a sweet film about the difficulties of growing up in rural Ireland 40 years ago, in a time when large families were commonplace whether the family could afford it or not. This led to children like Cáit essentially being abandoned by her parents and many wouldn’t have had kind relatives willing to spend time with them. It is a movie that strongly demonstrates the immeasurable impact a little bit of care and attention can have on a child’s life.

It is quite a slow film and I felt even at 90 minutes that it didn’t always have me fully invested, partly as the story is designed to move slowly and methodically. It is strongest in its quietest moments where little moments or revelations start to colour in the lives of the characters and add weight to the way they behave, and the performances are strong from a mostly unknown cast. ‘The Quiet Girl’ is a moving, if a little slight, movie about childhood and the importance of kindness, and it is a strong feature debut from Colm Bairéad.