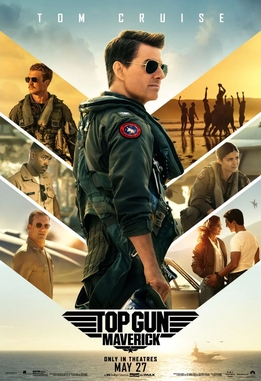 After more than thirty years of service as one of the Navy’s top aviators, Pete Mitchell is where he belongs, pushing the envelope as a courageous test pilot and dodging the advancement in rank that would ground him.

I must confess I find the love and nostalgia for ‘Top Gun’ a little bit baffling, perhaps as I’m a little too young to have seen it on release and only picked it up in later life. Having rewatched it recently, I’m standing by my stance – it’s a fun, cheesy and predictable movie (which isn’t necessarily a bad thing!) but there are far better 80s movies if you want to scratch that itch. Despite this, ‘Top Gun: Maverick’ has finally arrived in cinemas after some Covid related delays, and it has been a stunning hit with critics as well as audiences, so that immediately raised my expectations. The good news is this is a rare sequel that comfortably improves on the original; the less good news is it’s not quite the masterpiece some would have you believe.

Taking place nearly 40 years after the original, Maverick (Tom Cruise) is no longer the cocky rookie of the original movie, although he still has a lack of respect for authority and as his name suggests, is not exactly shy to go rogue and push the buttons of his superiors. Despite this, he is recruited as a ‘Top Gun’ instructor in order to help train some new aviators to undertake an urgent mission to bomb a rogue (unnamed) nation’s uranium enrichment plant. This brings back memories of his own training, particularly when he discovers one of the recruits is Rooster (Miles Teller), the son of his late best friend and partner Goose (Anthony Edwards). How this plays out will likely be of little surprise but that is part of the point and the familiarity is what drives much of the charm in this movie. It’s also driven by some frankly spectacular flying sequences, aided by the vast improvements in special effects in the 35 years since the first movie. I’ve no idea how accurate or realistic the maneuvers were but they were certainly thrilling to watch and ‘Top Gun: Maverick’ really nails the key sequence and the final act, which I suspect rightly play a large part in people’s thoughts on this. You do genuinely walk out the cinema feeling exhilarated.

‘Top Gun: Maverick’ improves on its predecessor in almost every way and in Tom Cruise, has one of our last bona fide movie stars who can successfully carry a movie such as this. A massive nostalgia hit that doesn’t just rest on those laurels and this was a perhaps surprisingly enjoyable sequel.