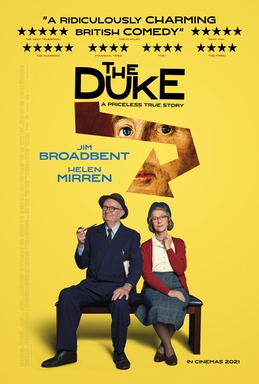 In 1961, Kempton Bunton, a 60 year old taxi driver, steals Goya’s portrait of the Duke of Wellington from the National Gallery in London.

Based on a remarkable little true story, ‘The Duke’ is a comedy caper featuring Jim Broadbent on top form in director Roger Michell’s last film after his sad passing last year. It is the story of an art theft (or art ‘borrow’) that took place in the early 1960s when an elderly Newcastle man called Kempton Bunton (a very suitable movie name!) stood trial at the Old Bailey accused of stealing a Goya painting of the Duke of Wellington from the National Gallery, and then returning it. Broadbent stars as the aforementioned Bunton and I thought this was a very enjoyable and light hearted movie that felt appropriately British – almost like a throwback to the classic Ealing comedies of the past.

The movie begins at the trial before taking us back 6 months earlier to introduce us to Bunton, his long suffering wife Dorothy (Helen Mirren) and his son Jackie (Fionn Whitehead). They live in a small place just outside of Newcastle and Bunton tends to spend most of his days either losing jobs for speaking out of turn, or campaigning for one thing or another – his latest campaign centering on free TV licenses for the elderly (something that is now in place – although it only happened in the year 2000!). An old fashioned social justice warrior if you will. He spends a few days in prison for refusing to pay the license fee (his excuse was he removed the part of the TV that allows the Bunton household to watch the BBC) and after losing yet another job, he turns his attention to the government’s recent £140k purchase of the Goya painting – something that riles Bunton up as he sees many around him suffering. One thing leads to another and the Goya ends up in a cupboard in his house, whilst the authorities go searching for an international criminal gang.

I had a lot of fun with ‘The Duke’, found it funny with a good story, with endearing performances from Broadbent and Helen Mirren as his wife who seems to always be one final straw away from kicking him out the house. It’s certainly a bizarre story, the perfect fodder for a movie, and in his final movie, Roger Michell brings it to life admirably with a lightness of touch and a smartly chosen runtime of just over 90 minutes which ensures it never outstays its welcome, capping things off with a comedic courtroom sequence that perfectly encapsulates the man that Kempton Bunton was and the film that ‘The Duke‘ is.