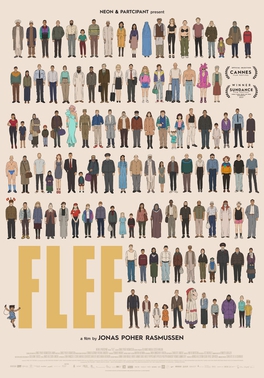 FLEE tells the extraordinary true story of a man, Amin, on the verge of marriage which compels him to reveal his hidden past for the first time.

‘Flee’ is a unique documentary that uses animation to retell the story of how Amin, an Afghan refugee, escaped his country after the Taliban came to power and ultimately made his way to Denmark where he now resides. It is a tense and gripping story of survival, about overcoming setbacks and showing resilience and a will to live no matter what, and it is brilliantly brought to the screen primarily using animation with some powerful clips of real life footage interspersed throughout.

The film is framed around a series of interviews conducted by director Jonas Poher Rasmussen with Amin, who for the first time is willing to share his story about his background and how he came to live in Denmark. In the present, he is getting ready to marry his husband and move into a new home, yet he still harbours fears about his past being discovered (Amin is an alias). The animation is a neat choice to counter this, and whether it was forced by this point or was a design choice, it’s undoubtedly an effective technique that adds something extra to the telling of Amin’s story. It is at different times a coming of age story, a story of sexual awakening and a story of overcoming circumstances that have severely hindered opportunities to live as best a life as you can, but at all times ‘Flee’ is excellent.

Amin’s story begins in Afghanistan in the mid-80s when it was a relatively free country, although not without its issues. He chronicles how this started to change towards the end of the decade as he discusses the changing political landscape as well as his own personal development, with the political changes ultimately leading his family to flee initially to Moscow, where they lived a life on the margins of society, trying to raise enough funds to pay traffickers to take them to Sweden where Amin’s older brother lived. Despite being out of Afghanistan, their lives are not free and ‘Flee’ does a great job of showing the dangers of being trafficked, and of living in a country that doesn’t want them there. Amin’s disdain for the Russian police in particular, is barely concealed.

‘Flee’ covers the political context to a point but ultimately this is a personal story, and I admit to being deeply moved by a key moment towards the end of the film where Amin is forced to confront his sexuality. ‘Flee’ is a brilliant documentary, a brilliant piece of animation, and more importantly, a brilliant movie in its own right, and I’m glad to see it was recognised in all 3 of these categories at this year’s Oscars (the first film to achieve this to boot!).