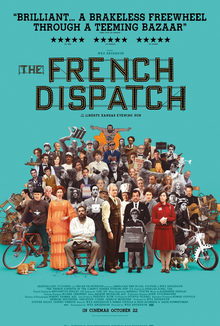 A love letter to journalists set in an outpost of an American newspaper in a fictional twentieth century French city that brings to life a collection of stories published in “The French Dispatch Magazine”.

Wes Anderson is one of those directors I’ve never really got. I don’t dislike his films and a couple I’ve really liked, but for the most part they don’t engage me (despite running a series on his movies on this very site!). ‘The French Dispatch’ is very much a Wes Anderson movie, and if you like his movies you’ll really like this, whereas if like me, you’re not a massive fan, you’ll be a little indifferent. That’s not to say this doesn’t have its moments, and every Anderson film has stuff to enjoy, even if it’s just the extensive cast list or the unique filming style which is always captivating. Still, the best recent Wes Anderson was the prison section in ‘Paddington 2’ that pays homage to his directing style, as opposed to anything he’s created himself.

His latest, ‘The French Dispatch’, is set in a fictional French town called Ennui-sur-Blasé, and the premise might just be the most Wes Anderson thing ever. In that town is an outpost of an American newspaper, ran by the curmudgeonly Arthur Howitzer Jr. (Bill Murray) who has a lot of time for his writers and very little for anyone else. The film is structured like a magazine, because of course it is (I will try to stop this…!), giving us three primary stories, an intro and an obituary, all set within this quirky French town at some time in the recent past. The main stories cover a convict turned artist (Benicio del Toro) and the relationship with his prison officer/muse (Lea Seydoux), a story of student politics that involves a love affair between a wannabe revolutionary (Timothee Chalamet) and an older woman (Frances McDormand), and the story of a kidnapping retold by a journalist (Jeffrey Wright).

This setup is perfect for Anderson as it indulges his passion to cast every living actor and actress to the degree that the cast list at the bottom of the page will be almost as long as this review is. It’s a love letter to journalism and there are definitely moments to enjoy here, but I rarely find myself fully drawn into the worlds Anderson creates and that feeling remains here. All the good things that can be said about Anderson apply here, from the unique framing and stylistic approach which does mark him out as director who remains a true original. However, it also has the feel of a child playing with his toys, enjoying the quirks of his craft more than the characters and the story, which are definitely secondary. Why cast Saoirse Ronan and have her featuring for barely a minute of screentime, other than just because you can? The quality of the individual segments varies, but the performances are always good and there’s a short scene with Tilda Swinton that provided a genuine laugh out loud moment – not something that often happens to me whilst in the cinema! I also liked the brief diversions into animation and the wacky races style car chase towards the end, with Jeffrey Wright’s soothing tones providing commentary.

For better or worse, ‘The French Dispatch’ might be the most Wes Anderson film ever. His fans will love it, his detractors will hate it, and for those like me who finds myself in the middle, I’ll just wonder what all the fuss is about, and still go to see his next movie. C’est la vie.