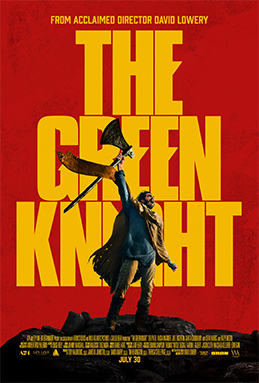 A fantasy retelling of the medieval story of Sir Gawain and the Green Knight.

The legend of King Arthur and the Knights of the Round Table has been told many times before on screen, to differing degrees of quality (let’s say very little about Guy Ritchie’s attempt…), but in David Lowery’s ‘The Green Knight’, we have a movie that takes place within this setting with a unique take in keeping with Lowery’s particular sensibilities. King Arthur (Sean Harris) does feature, but this is the story of Gawain (Dev Patel), Arthur’s nephew who foolishly takes on a quest he knows will lead to almost certain death. Lowery plays around with conventions, using the quest narrative which is common for a film such as this, but packing the fringes with surreal, trippy imagery and an exploration of themes not always covered in such material. This is one man’s odyssey into darkness.

Dev Patel stars as Gawain, who is first introduced as a bit of a waster (or whatever the medieval version of one is!), lacking in purpose and spending his time in brothels. After a scolding from his mother, Morgan le Fay (Sarita Choudhury), Gawain is seated in Arthur’s court when the mysterious Green Knight shows up, challenging any knight to land a blow on him, on the basis that they travel to a place called the Green Chapel one year further on to receive an equal blow in return. Gawain, perhaps not fully thinking through the consequences, chooses to take on the challenge, leading to a year of ignoring his likely fate and becoming increasingly worried as his date with destiny arrives.

After this year has passed, Gawain sets out on his quest, along the way encountering various people and fantastical creatures who dispense wisdom, attempt to rob him, or provide shelter. This style of fantasy storytelling reminded me of some of Matteo Garrone’s work such as ‘Tale of Tales’ or even his recent version of ‘Pinocchio’, macabre fantasy based on darker aspects of European folklore – worth checking those films out if you haven’t seen them. In terms of the themes explored, there’s a strong environmental edge particularly relating to mankind’s treatment of nature. The Green Knight itself is essentially a talking tree (bloody ents!), representing nature being ruthlessly cut down in front of a court of men, and on this journey, Gawain is forced to confront this. It’s also about the importance (or lack thereof) of legacy and about living a life with integrity and purpose, something Gawain lacks initially, and then starts to regret as he realises the true end goal of the purpose he has chosen for himself.

This isn’t my favourite genre but I found ‘The Green Knight’ to be an absorbing fantasy adventure with a brilliant lead performance from Dev Patel. It’s the type of movie that makes you think, whilst also working as a truly sensory experience through the choices of imagery and music that punctuates the silence of the eerie English woodlands. It only had a brief release in UK cinemas but you can catch it on Amazon Prime now.