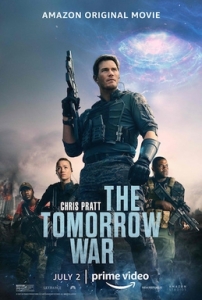 A family man is drafted to fight in a future war where the fate of humanity relies on his ability to confront the past.

Amazon’s output in terms of movies released on its prime service has been patchy to say the least and ‘The Tomorrow War’ didn’t really look like changing that, such is the disappointing record of sci-fi action movies of recent years (the terrific ‘Edge of Tomorrow’ aside). Much to my surprise I really enjoyed this a lot, much more than I expected too, and I was on board throughout and got to that place where I was able to overlook some of the undoubted flaws that the movie has. This is a cheesy sci-fi action movie but it has a good premise and I felt it delivered a really entertaining piece of cinema.

The film begins in December 2022 as biology teacher (and former Special Forces man) Dan Forester (Pratt) is watching the final of the World Cup, when the game is interrupted by a group of soldiers from the future who have returned to warn that humanity is on the brink of extinction due to a war with an alien race. This warrants an immediate response that includes people being drafted to do a 7 day ‘tour’ in the future, travelling back and forth via a wormhole device known as a jumplink. It’s quite a neat premise in my opinion and I felt it played with the time travel angle well as we follow Dan as he heads into the future. It does play out somewhat predictably and there’s a couple of ridiculous fight scenes towards the end, but I was fully invested by this point and I felt the action sequences were well staged for the most part.

‘The Tomorrow War’ also uses its science fiction basis well to explore Dan’s relationship with his daughter across two timelines, which is one of those stories that can only really be done well within a sci-fi setting. It appears to be getting a sequel, which I’m not sure it needed, and it possibly is a little longer than necessary, but as far as action packed escapism goes with a bit of humanity underpinning it all, I was a fan of ‘The Tomorrow War’.