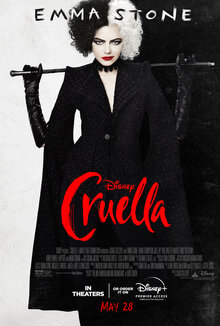 Disney’s latest endeavour, alongside remaking their movies in live action, appears to be going through their older movies and attempting to provide sympathetic backstories for their main villains. I wasn’t a fan of ‘Maleficent’ and didn’t bother with the sequel to that prequel so it would be fair to say I wasn’t massively excited for ‘Cruella’, but this is much better than it had any right to be and is actually very entertaining!

It’s directed by Craig Gillespie who helmed the superb ‘I, Tonya’ and he brings the same zip and energy to the material here. The setting helps – we’re in 1970s London – and that provides a basis to explore the music and the fashion of the time to terrific effect. The performances are great as well, from the leads to the support, and it balanced the nods to the original Disney movie with a story in its own right. It does still have the central problem of trying to redeem a character best known for murdering puppies, and let’s be honest, that can’t be overcome, so ‘Cruella’ mostly ignores it to tell a story in its own right

After an introduction 20 or so years earlier, we move into the 70s when Cruella is a petty thief with dreams of making it in the fashion world, living in an abandoned warehouse with her two friends (Paul Walter Hauser and Joel Fry). An encounter by chance with renowned designer Baroness von Hellman (a brilliant Emma Thompson) gives her an in to fashion and an in to avenge something important that happened in her past. I should also mention that Cruella is played by Emma Stone and she is incredibly enjoyable in the role as well.

It is too long – there’s no reason for this to be 2 hours plus and I was ready for it to end before it actually finished, but if you want to see some quality actors camping it up in 1970s London to some cracking music and cracking fashion, then ‘Cruella’ does the job. In some quarters I’ve seen it described as ‘The Devil Wears Prada’ meets ‘Joker’ and that’s not a bad analogy, even if it doesn’t quite meet the quality of either of those films. Not sure future sequels would be that appealing as she becomes closer to the puppy stealing villain of the animated classics! Overall it’s 3 stars but very close to 4, for what it’s worth.