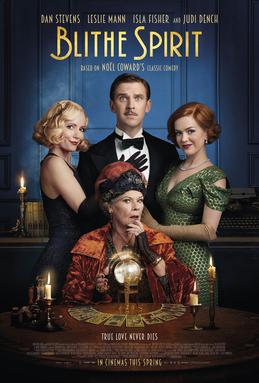 A spiritualist medium holds a seance for a writer suffering from writer’s block but accidentally summons the spirit of his deceased first wife, which leads to an increasingly complex love triangle with his current wife of five years.

‘Blithe Spirit’, Noel Coward’s 1941 play, has been adapted for the screen on several occasions, most notably by David Lean in 1945. That film was critically acclaimed, noted for its British take on the American screwball comedy style that had been churning out hits across the Atlantic since the onset of ‘talkies’. This latest effort, the feature debut from theatre director Edward Hall, brings together a star-studded cast, but fails to inject any life into this old material in a forgettable movie.

The story centres on novelist Charles Condomine (a game Dan Stevens), who is working on his latest novel and wishes to learn more about the occult to inform his writing. To do this, he hires an eccentric old medium (Judi Dench) to hold a séance at his home, which has the unintended consequence of bringing his deceased wife (Leslie Mann) back to life. This may not have been such a big problem if only Charles hadn’t remarried and it’s fair to say the second Mrs. Condomine (Isla Fisher) has big problems with this turn of events. As you’ll see from the premise, the situation is ripe for screwball comedy, but I felt ‘Blithe Spirit’ was a little too slickly produced and never quite gets the tone right. I also think screwball comedy is a genre that worked very well in its heyday with a specific style of acting mannerisms and filmmaking – for my money it doesn’t work nearly as well in the modern age and this just feels like it’s trying a little too hard to force the laughs.

The cast is game and Dan Stevens is becoming a reliable lead, but I thought this adaptation fails to generate a spark to bring the story to life. I haven’t seen the play or David Lean’s film, however I can imagine they must work better than this effort and ‘Blithe Spirit’ is ultimately a fairly pointless and forgettable British comedy.