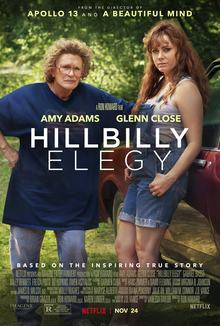 An urgent phone call pulls a Yale Law student back to his Ohio hometown, where he reflects on three generations of family history and his own future.

Based on a bestselling memoir by J. D. Vance, ‘Hillbilly Elegy’ is a movie about his life and his upbringing in Ohio, in a family with a history of poverty, drug abuse and violence. The film, directed by steady hand Ron Howard, uses the framing of Vance in the present (played by Gabriel Basso in the film) where he is a Yale student to look back on his life, reflecting on the experiences that made him the person he is today.

It would be fair to say ‘Hillbilly Elegy’ has had a bit of a kicking before it was released on Netflix, with it being dubbed ‘poverty porn’ in some quarters, but I would take exception with this critique. The film is far from perfect and it rarely rises above a by the numbers melodrama, but I don’t believe it was exploiting its characters – for better or worse, people like the Vance’s exist and the filmmakers (and Vance himself who lived this experience) are trying to show this existence and the difficulties that exist at this end of the American Dream. It’s only partially successful in doing this, but I don’t think it’s trying to reinforce stereotypes – merely to show this part of America as it is, through the prism of the people Vance knew, many of whom were family members.

I do get the impression that some individuals are uncomfortable with anything that portrays characters such as the Vance’s who fit into a stereotype, ignoring that there is generally a reason for a stereotype to exist in the first place. I think Vance in his writing (and subsequently the filmmakers) are trying to show how easy it is to fall into the situations these characters find themselves in, and how difficult it is to get yourself out of this cycle in a modern America that likes to talk up the American Dream without considering that for many of its citizens that dream never was and never will be achievable. If anything, my biggest criticism is how much the film is pure Oscar bait, repackaging its source material as an inspirational drama with strong performers, without containing the depth or perception to dig into these challenging themes.

The main selling point for ‘Hillbilly Elegy’ is its acting performances, with Amy Adams and most notably Glenn Close playing parts that they can really get their teeth into. It’s Close who is the most impressive, playing the Vance family matriarch, a tough, flawed woman who could easily turn into a caricature in the hands of a lesser performer, but she’s never anything less than mesmerising in Close’s hands. As this is based on a memoir (the idea of someone writing a memoir at J. D. Vance’s age is insane to me, but that’s another story!), we already know how a lot of is going to play out and that does take away some of the tension in the drama. Howard is an accomplished director and he does his best to keep the audience on their toes by playing with the timeline but I was never fully invested in the characters which is a problem with a film such as ‘Hillbilly Elegy’.

‘Hillbilly Elegy’ is better than some critics would have you believe, but nor is it as good as it wants to be, or as you’d expect it to be given the talent involved. It will likely resonate more for the debates it seems to be generating that are unrelated to the portrayal on the screen, which at its heart, is the real story of J. D. Vance’s upbringing and how that background both hindered and helped make him into the person he is today. It’s worth watching anyway!