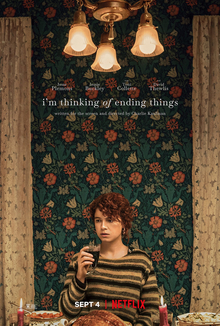 Full of misgivings, a young woman travels with her new boyfriend to his parents’ secluded farm. Upon arriving, she comes to question everything she thought she knew about him, and herself.

Charlie Kaufman has never been one to play things down the middle and his latest movie is every bit as idiosyncratic and surreal as we’ve come to expect from him. Based on a 2016 novel by Iain Reid, ‘I’m Thinking of Ending Things’ is the story of a young woman (Jessie Buckley) trying to figure out how to end her relationship with her boyfriend Jake (Jesse Plemons) as they embark on a road trip to visit his parents on a farm in the countryside. Scenes of a high school janitor interrupt the main plot sporadically and you’ll have to bide your time to understand the relevance of these sequences.

I’m a big fan of Kaufman’s work although I have more love for his scripts (‘Being John Malkovich’, ‘Eternal Sunshine’, ‘Adaptation’) than the films he has also directed (‘Anomalisa’, ‘Synecdoche, New York’) and unfortunately I felt ‘I’m Thinking of Ending Things’ falls more into the category of the latter. The film starts off on a fairly low key note and the conversations Buckley and Plemons have in the car are well written and acted, drawing us into their relationship, but once they arrive at Jake’s parents house things start to get increasing weird, and for me, increasingly incomprehensible. Toni Collette and David Thewlis play Jake’s parents and their nature seems to throw Buckley’s character (the character is never clearly named in the film) off, exacerbated by a series of surreal encounters she has with aged versions of them both. It only gets stranger once they leave the farm to head back to the city, particularly as the segments with the janitor have their importance to the main plot revealed.

If I had to pinpoint why I didn’t take to this film, I’d argue it’s because it wasn’t as thought provoking or as insightful as it is trying to be, nor does it have humour in the surreal sections to act as a counterbalance to a plot that is interchangeably depressing and dull. After ‘Tenet’, this is the second film recently I’ll freely admit I didn’t understand, but whereas that film was a thrill ride that took me with it, ‘I’m Thinking of Ending Things’ never really grabbed me, despite some good sequences and good performances.