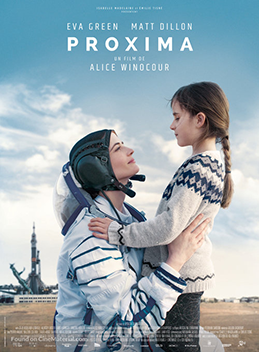 An astronaut prepares for a one-year mission aboard the International Space Station.

Making a choice between your career and your child is the moral question at the centre of ‘Proxima’, a relatively solid drama about a female astronaut preparing for a year long stint on the International Space Station. The film surrounds the lead up to a mission that will take three astronauts up to the space station, following the training they go through and following Sarah (Eva Green) as she comes to terms with the impact this experience will have on her and her relationship with her daughter. It’s directed by French director Alice Winocour who helmed the intense thriller ‘Disorder’ a few years ago and this is a more contemplative piece of work with a compelling lead performance from Eva Green.

Eva Green is one of the best actresses on the planet and she is typically excellent in the leading role, depicting Sarah’s anguish over the situation she finds herself in. She’s spent her entire career building up to this moment, yet the sacrifices it involves are all consuming and requires her to spend a year away from her young daughter. ‘Proxima’ is at its strongest when its focus is squarely on Sarah, and I felt her relationship with ex-husband and father of her child Thomas (Lars Eidinger) was well depicted, showing a mutual respect and understanding between two people who had nonetheless drifted apart. Where I felt the film was less successful was when it turned away from the personal elements to the astronaut training, particularly in the slightly antagonistic relationship that builds up between Sarah and Mike (Matt Dillon), an experienced astronaut who is dismissive of her abilities. There’s clear shades of sexism in Mike’s views and I think the way this aspect of the film played out veered too close to cliché and it felt like it was purely inserted to add an extra node of conflict to Sarah’s decision.

‘Proxima’ has a lot of good things to recommend, not least Eva Green’s lead performance, but I did think it struggled to balance all of the themes it wanted to explore and the end result is something worthwhile, but not as satisfying as it could have been.