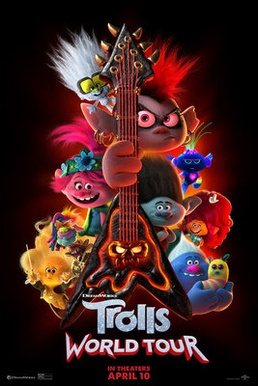 Poppy and Branch discover that they are but one of six different Troll tribes scattered over six different lands devoted to six different kinds of music: Funk, Country, Techno, Classical, Pop and Rock. Their world is about to get a lot bigger and a whole lot louder. A member of hard-rock royalty, Queen Barb, aided by her father King Thrash, wants to destroy all other kinds of music to let rock reign supreme. With the fate of the world at stake, Poppy and Branch, along with their friends, set out to visit all the other lands to unify the Trolls in harmony against Barb, who’s looking to upstage them all.

Who would have thought that a sequel to a minor animated success would prove to be a potentially important litmus test for the viability of sending major releases to streaming services in tandem with the traditional cinematic release? With the cinematic release schedule decimated for the forseeable future due to coronavirus, the only films still getting released in the UK are arthouse releases that would have expected to pair a cinematic release with a VOD option through the likes of Curzon Home Cinema or Mubi. That brings me to ‘Trolls World Tour’, which has gone against the grain and been released by Universal Pictures broadly in line with its planned schedule direct to streaming, and it’ll be interesting to see how many people pay the £16.99 rental fee to watch at home. One to keep an eye on….

In any case, this is a review of the film and not the wider context, but I felt it was useful scene setting given the climate. The first ‘Trolls’ film was described best (by whom I cannot recall) as being like ‘an explosion in a glowstick factory’ and if anything, this sequel really doubles down on that visual palette, whilst ramping up every other element to create this colourful and kaleidoscopic movie. The plot centres on the pop trolls from the first film, led by Anna Kendrick’s Poppy and Justin Timberlake’s Branch, having to face off against the rock trolls, who are trying to steal the music from the other regions of the troll kingdom and surround them in darkness. I don’t recall the trolls being referred to as pop trolls in the first film, but never mind, the plot itself is pretty irrelevant, and serves merely as a jumping off point to deliver a smorgasbord of colour, music and trippy visuals, with some good singalong songs in the different parts of the kingdom. To be completely honest, it’s quite enjoyable and a welcome piece of escapism during these challenging times, and at just under 90 minutes it doesn’t outstay it’s welcome either.

‘Trolls World Tour’ is likely to be remembered more for its release strategy than the quality of the film itself, but there’s certainly worse things to do at the moment and if you’ve got kids I’m sure they’ll find much to enjoy here!