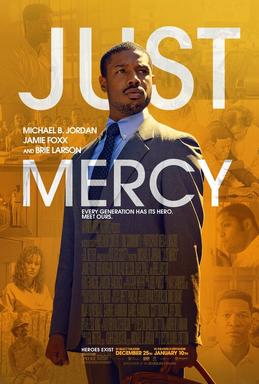 Based on the true story of Walter McMillian (Jamie Foxx), an African-American man who was wrongfully imprisoned and sentenced to death for a murder he did not commit, ‘Just Mercy’ is an engrossing legal drama with a lot to say about the American justice system. Directed by Destin Daniel Cretton (helmer of the superb ‘Short Term 12’), it tells McMillian’s story through the eyes of his attorney Bryan Stevenson (Michael B. Jordan), a recent Harvard graduate who has both the passion and youthful naivety that leads him to Alabama and McMillian in the first place. Much of the film takes place in Monroeville, Alabama, where the crime took place, and through various examples we begin to understand the corruption and racism that led to McMillian’s fate.

Stevenson arrives in Alabama with ambitions to set up an organisation to provide death row inmates with a legal defence, and he faces immediate hostility from the District Attorney and the local sheriff, who have no interest in a northern, black lawyer taking a second look at their cases. It doesn’t take long for Stevenson and his colleague Eva (an underused Brie Larson) to discover inconsistencies in several cases as well as uncovering the inherent bias within a deeply flawed justice system. Monroeville was author Harper Lee’s birthplace and ‘To Kill a Mockingbird’ was set in a place based on her hometown, so there’s a certain irony in the contrast between a town that celebrates the success of that novel, yet continues with an unjust legal system that is designed to work against people like McMillian, much like Tom Robinson was treated in Lee’s novel.

The leads are good but I thought the supporting performances were where ‘Just Mercy’ really shined. Tim Blake Nelson is outstanding in delivering an empathetic portrayal of a troubled criminal who holds the key to McMillian’s freedom, and Rob Morgan is absolutely heartbreaking as a fellow death row inmate. The key to a film like this succeeding is in investing the audience in every aspect of the case and I was on board throughout, rooting for McMillian and Stevenson to get the justice they deserve. I was really taken by this film and whilst it’s a story we’ve seen before, it’s well made and well performed and I’m glad I now know more about this particular case and these people.