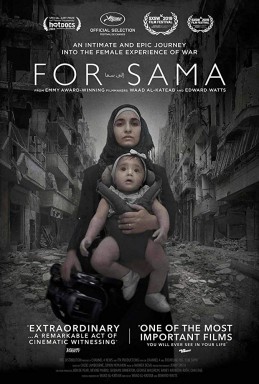 FOR SAMA is both an intimate and epic journey into the female experience of war.

One of the year’s best documentaries, ‘For Sama’, is a powerful piece of work about the experiences of living in Aleppo, Syria, during the Syrian Civil War, which still rages on today. Created as an ode to her daughter Sama, filmmaker Waad Al-Kateab has created something that is intimate and personal, yet also an important documentation of the human cost of war that is not always covered by the mainstream media in the United Kingdom

The film takes place over 5 years and tells the story of Al-Kateab and her family during the war as they face the difficult choice to flee to safety, or to stay and help the victims in their home city. Al-Kateab’s husband Hamza is a doctor and much of the film takes place in hospitals, either purpose built or makeshift, as they frantically try to help those injured by the relentless bombing attacks. I think what ‘For Sama’ does so well is to maintain a personal focus, centering on the victims and the ordinary citizens damaged by the actions of politicians and governments, and I thought it was heartbreaking and important viewing.

Over the course of the film we see Al-Kateab’s life change immeasurably as she becomes a parent and becomes more active in documenting and fighting against the oppressive dictatorship that are wreaking havoc in Aleppo and across Syria. It’s an undoubtedly difficult watch but there are moments of light sprinkled throughout, such as one miraculous survival which just hit me like a ton of bricks. I also liked the aspects that focused on Waad and Hamza trying to make a semblance of a life amidst the carnage, getting their own house and creating their own garden, and the small joys and moments in life that they share that keeps them going.

‘For Sama’ is an outstanding documentary, depicting the horrors of war through the perspective of a woman trapped in the middle, and hopefully it is seen as widely as possible.

For another superb documentary about the Syrian Civil War, see ‘City of Ghosts’, a film about the city of Mosul and the experiences of a group of activists fighting back against the Islamic State.