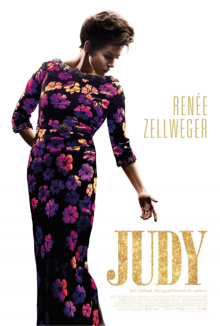 Legendary performer Judy Garland arrives in London in the winter of 1968 to perform a series of sold-out concerts.

Judy Garland was one of the biggest stars of early Hollywood, best known for ‘The Wizard of Oz’ and a memorable singing voice. She is also remembered for dying relatively young at 47 after a career that started when she was a child and never truly let its hold on her life go. ‘Judy’ is a biopic primarily focused on the final few months of Garland’s life when she relocated to London and performed a series of shows that epitomised both the scale of her talent and the shell she’d became by this point. Renee Zellweger stars as Garland and she inhibits her perfectly, capturing her mannerisms, her look and her voice and her performance is the shining light that drives this film forward.

The film takes place in early 1969 when Judy was essentially forced to take on a run of shows in London to pay off debts and support her family. Already fragile by this point, she moved away from her children to live in a hotel room surrounded by strangers with the sole job to prepare her for and get her on stage. This is an interesting point in Garland’s life to focus on and I felt it acted as a summary of her tragic life in microcosm. Throughout this run, as indeed throughout her life, Garland was treated as a product not a person, as a commodity to be packaged up and sold to willing consumers, and with a limited support network we can see her struggling. It’s why her encounter with a couple of genuine fans is such a delight in a tragic film – when everyone wants a piece of her it’s refreshing to see two people who just want to spend time with her as she is.

The film utilises flashbacks to her teenage years where she’d already been taken firmly under the grip of the studio system and these scenes serve to demonstrate the environment that led her to the person she is in the film’s present, and I actually found these to be more interesting in many respects than the present day activity. In this case, a traditional cover all bases biopic may have appealed to me more. I did like ‘Judy’, and Zellweger’s performance is remarkable, but I didn’t get swept up in it as much as I’d hoped and I felt it did little to stand out from the crowded biopic field.

Follow "The only thing I do know is that we have to be kind. Please, be kind. Especially when we don't know what's going on." Everything Everywhere All at Once (2022) on WordPress.com
Loading Comments...
%d bloggers like this: