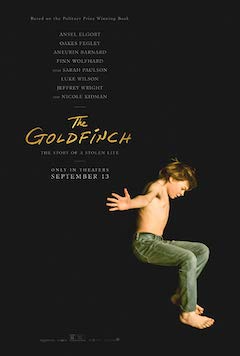 A boy in New York is taken in by a wealthy Upper East Side family after his mother is killed in a bombing at the Metropolitan Museum of Art.

Based on a Pulitzer prize winning novel and 2013 bestseller, ‘The Goldfinch’ is the inevitable film adaptation that tends to follow successful literary releases. I haven’t read the book so my view of this is purely based on the film as opposed to a comparison against the novel, and I found this to be an absolute chore to sit through. It’s slow, ponderous, and gives no reason to care about any of the characters, and at 140minutes I was constantly checking my watch.

The film is about a young man whose life is transformed after his mother dies in a terrorist attack at a museum, from which he steals a famous painting called ‘The Goldfinch’. It follows his life, moving backwards and forwards in time almost at random (the editing is anything but tight here), focusing on how this experience and this painting changes his life and the path it takes. The biggest problem is that Theo (Oakes Fegley as a child, Ansel Elgort as an adult) isn’t particularly interesting, nor likeable, which isn’t necessarily an issue but we spend so much time with him and the film clearly wants us to empathise with him. I’m sure the book must get closer to the character and why he behaves as he does on the back of an immense tragedy, but John Crowley’s film wants us to care about his fate and all I could see was a little thief who causes nothing but pain and harm to those around him.

John Crowley’s last film was the superb ‘Brooklyn’, a charming romantic drama about an Irish immigrant in New York, but none of the deftness of that film is on display in this clunky, bloated drama. I really disliked this, wanted it to end, and it feels like a failure for all involved – a shame if the book is as good as many say it is.