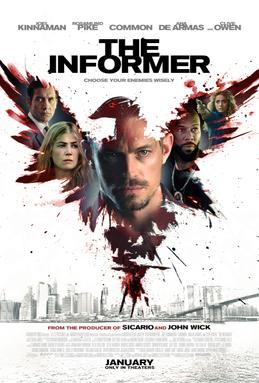 An ex-convict working undercover intentionally gets himself incarcerated again in order to infiltrate the mob at a maximum security prison.

My expectations were fairly low for ‘The Informer’, based on lukewarm critical appraisal and a trailer that didn’t do much to make the movie look any more than a generic nuts and bolts thriller. To an extent this is a nuts and bolt thriller, but it’s well made, has good performances and it has a pretty good story that kept me entertained throughout. The film centres on Pete Koslow (Joel Kinnaman), a reformed criminal who now works undercover for the FBI, on a remit to infiltrate the Polish mob’s drug trade in New York in exchange for his freedom. When a drug deal goes wrong, Koslow is abandoned by his handlers and must fight for his life in the brutal prison he thought he’d escaped from.

I’d first came across Joel Kinnaman in the US version of ‘The Killing’, the popular Danish TV series, and at that point I certainly wouldn’t have imagined he’d turn out to be a fairly reliable lead in action movies/TV series, and he makes for a good lead here. The supporting cast includes the likes of Rosamund Pike, Common, Ana de Armas and Clive Owen, who feels a bit wasted as a corrupt superior (could argue much of Owen’s latter day career falls into this category). The set up and bust follows familiar genre trappings, but once we move into the prison the film is surprisingly smart in how the story unfolds, aided by Kinnaman’s committed performance. None of the subplots are wasted either, with each element contributing to the overall storyline.

There isn’t much in the way of overarching themes here, but as a story of one man’s quest for survival and freedom, ‘The Informer’ was entertaining and I found a lot to like about it.