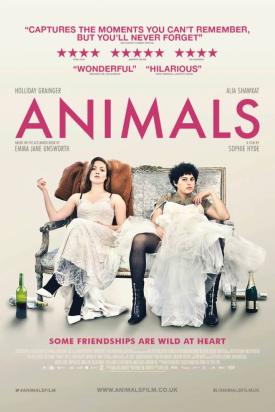 After a decade of partying, Laura and Tyler’s friendship is strained when Laura falls in love. But what is really stopping her from fulfilling her dreams?

Set in Dublin, ‘Animals’ follows two best friends, Laura and Tyler, who spend their days working to fund a partying lifestyle in the Irish capital. Laura has ambitions to become an author, however she’s now in her early 30s and has made limited progress, and when she meets a partner and becomes engaged it prompts her to question what she wants to do with her life, testing her friendship with Tyler in the process. This is a smartly written, clever film from Sophie Hyde that poses questions about growing up and coming to terms with change, without making rash judgements or reaching for a neat Hollywood ending.

Laura and Tyler are played by Holliday Grainger and Alia Shawkat and their chemistry as friends feels natural and they are really wonderful together. Grainger’s turn is more reserved, creating a moving portrait of a character conflicted about which direction to take her life in, and Shawkat is just superb as the anarchic Tyler, a character who you could see as the life and soul of the party, as well as the loneliest person in the room. Their friendship is front and centre and feels lived in and realistic, and it’s an insightful portrayal, particularly as they start to clash over the changes starting to happen in their lives. The title of the film can refer to a number of things and it works as a metaphor for the decisions facing Laura, as well as on a more literal level to depict some of the girl’s behaviour. In one scene which is perhaps a little on the nose for an otherwise subtle film, the characters observe an urban fox, pondering what its most important priority is – the most resonant answer being ‘safety’.

‘Animals’ has got a lot to say about the experience of growing up and reaching a point in your life where you start to question who you are and who you want to be, and we follow Laura as she reaches this difficult point. Does she want to be the party animal forever, even when it impacts on her ability to move on with her life ambitions and potentially her future? Or does she want to settle down into a lifestyle that society expects of you, forgoing a lot of what drives her and makes her the person she is as a result? Hyde’s film cleverly shows two paths, both of which have their own attractions, yet are also frightening. The aforementioned safety can apply to both, in sticking to the status quo and the forgotten nights with Tyler, or the safety of settling down with her teetotal fiancé. As Laura starts to realise, maybe neither path is right for her.

As well as the above, ‘Animals’ is also a very funny film that makes smart observations about society and our generation (I too, am a similar age to these characters), and I thought it was charming and affecting. I came to the conclusion that the film’s ultimate theme is around change, and how we’re scared of it, no matter what it is. As Laura faces up to these changes, she’s forced to make choices that won’t keep everyone happy, least of all herself, and ‘Animals’ excellently navigates the difficult territory that comes with reaching this point in your life.