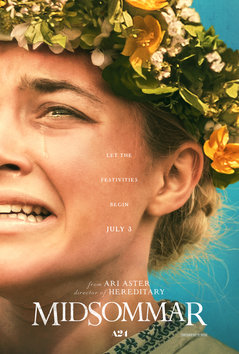 A couple travels to Sweden to visit a rural hometown’s fabled mid-summer festival. What begins as an idyllic retreat quickly devolves into an increasingly violent and bizarre competition at the hands of a pagan cult.

Ari Aster is back, a year or so after the release of ‘Hereditary’, which became one of the most talked about horror films (alongside Jordan Peele’s ‘Get Out’ and ‘Us’) in recent years. ‘Hereditary’ was a visceral experience that was impossible not to be affected by, whether you liked it or not, and it’s perhaps no surprise that ‘Midsommar’ is in the same vein. I felt ‘Hereditary’ was a terrific film until the final act where it became a little too ridiculous for my liking, so it’s good to report that I found ‘Midsommar’ to be an altogether more consistent movie, even if it lacked some of the intensity that thrummed throughout ‘Hereditary’.

‘Midsommar’ is primarily centered around a pagan festival held in Sweden by a small commune, however it wisely doesn’t start here, choosing instead to spend some time introducing the characters we’re going to follow and the motivations that drive them to spend two weeks of their summer vacation in such an unusual fashion. Our lead is Florence Pugh’s Dani, a young woman attempting to salvage her crumbling relationship with Christian (Jack Reynor), when an unthinkable tragedy befalls her. Pugh has rapidly established herself as one of the most watchable performers around at the moment and this is her finest performance yet. She carries most of the film, a lot of which deals in deeply primal, visceral and emotional material, and Ari Aster’s choice to film in long takes must have made for a truly grueling experience for Pugh. Nonetheless, it brings out the best in her, and if awards ceremonies awarded performances in horror movies, she’d be a lock (much as Toni Collette should have been for ‘Hereditary’). Alongside Pugh and Reynor, the student group is comprised of Josh (William Jackson Harper), Mark (Will Poulter) and Pelle (Vilhelm Blomgren), a Swede who invites the group to spend the summer in Sweden. The tension in Dani and Christian’s relationship is superbly drawn out and will be recognisable to anyone who has been in that strange space before a break up officially happens, and this acts as important subtext for the other themes Aster chooses to explore once the group arrive at the festival.

A disorientating mood is set from the outset as Aster flips his camera upside down as we follow their car on the way to Midsommar, along quiet country roads, and it’s a sequence that really shows off Aster’s stylistic talents as a director. We know that bad things are going to happen as this is an Ari Aster movie, but the sinister undertones and sense of foreboding are expertly crafted to draw us into the experience. We, as the audience, become every bit as much an outsider as Dani, Christian, Josh and Mark are, and there’s an element of dark fun in waiting for the mood to really turn. ‘The Wicker Man’ is the obvious reference point here and I suspect it’s certainly had an influence on ‘Midsommar’, albeit this film packs a lot more in to a runtime that comes in at nearly 2 and a half hours, longer than necessary in my opinion. I did feel that the film actually lost a lot of the tension once it was established exactly what was going on, and whilst the conclusion wasn’t quite as out there as ‘Hereditary’, I did find my interest waning as we approached the finale. Ari Aster is an incredibly talented filmmaker and ‘Midsommar’ is an arresting experience, but I do think his ambitions in both of his films to date have ran away from him to an extent, leaving the ultimate execution lacking something to really tie everything together in a satisfying way.

‘Midsommar’ is an unsettling follow up to ‘Hereditary’ from Ari Aster, drawing out a brilliant performance from Florence Pugh. Like ‘Hereditary’, it’s not really a film I would say I liked, but I was captivated by it and it affected me in a way that only good art can.