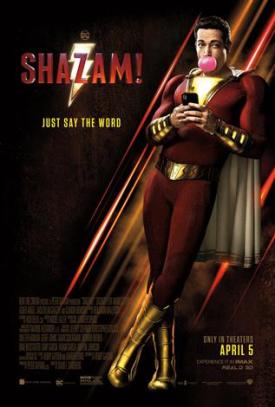 We all have a superhero inside us, it just takes a bit of magic to bring it out. In Billy Batson’s case, by shouting out one word – SHAZAM. – this streetwise fourteen-year-old foster kid can turn into the grown-up superhero Shazam.

The latest film from DC comics is another attempt to distance themselves from the darker, critically panned films that began their attempts to replicate the success of Marvel’s Cinematic Universe. Following on from the uneven, but ludicrously enjoyable ‘Aquaman’ comes ‘Shazam!’, another entry that mostly tells a self contained origin story without the challenges of serving the purposes of a larger group of films, and I liked it a fair bit more than I expected too. It’s based on a lesser known character in the DC suite (at least to myself), and centres on a young boy who turns into the titular superhero when he shouts ‘Shazam!’.

An opening sequence introduces us to the concept of ‘Shazam!’, which involves an ageing wizard seeking a suitable candidate to pass his power on too, for the purpose of protecting the world against a group of evil demons who grow stronger as the wizard gets weaker. The high fantasy concept is a little hokey but it forms only the basis of the story and the filmmakers are more interested in exploring the school comedy and what might happen if you gave a kid a series of superpowers. The kid is Billy Batson (Asher Angel), a troubled kid who has spent his youth bouncing around foster homes after getting separated from his mother as a very young child. On arriving at another foster home he continues in the same vein but he does form a tentative friendship with Freddy Freeman (Jack Dylan Grazer), another kid living with the Vazquez family, which really takes off when Billy ends up transforming into the superhero Shazam. Zachary Levi plays the ‘superhero’ version of Billy and his performance does a good job of capturing how a child might react if they just realized they had superpowers. Mark Strong features as the bad guy who harbours resentment after being shunned by the wizard as a child, and he, alongside Levi and the child performers, all produce good work.

The film is undoubtedly too long and would have benefited from a tighter edit, but I thought it balanced the comedic and dramatic elements well, finding the right, lighter tone for the material and I enjoyed it a lot.