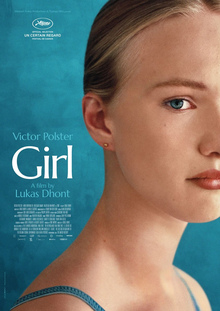 Lara is a 15-year-old girl, born in the body of a boy, who dreams of becoming a ballerina.

Directed by Lukas Dhont in his feature debut, ‘Girl’ is a Belgian film about Lara (Victor Polster), a 15 year old transgender girl who has ambitions to become a professional ballerina. The film follows her story as she moves with her family to attend a prestigious dance school, balancing her professional ambitions with the hormone replacement therapy she is going through to aid her transition. The film was inspired by the story of Nora Monsecour, a trans female dancer also from Belgium, although in some quarters its portrayal of the trans experience has drawn criticism.

The main thing I liked about the film was its focus on performance and use of visuals to tell its story as opposed to dialogue – it’s the epitome of a film using the cinematic art form to show and not tell. We follow Lara at her lowest points and her happiest when she’s dancing and Victor Polster’s subtle performance lets us in just enough to empathise with what Lara’s going through at every moment. The film has a lot of nudity, particularly of Lara as she explores her body, and I expect this will make some viewers uncomfortable, but I felt it was powerfully used to help us understand Lara’s experience. For the most part this is a delicate character study until a couple of key scenes (one physical, one psychological) really underline the difficulty of what Lara is experiencing. I liked her supportive father (played by Arieh Worthalter) and I found the film to be an empathetic and compelling portrait, even if the glacial pace and repetition laboured the point at times.

‘Girl’ is a strong debut from filmmaker Lukas Dhont, with a breakout performance in the leading role from Victor Polster, and even if it didn’t captivate me as much as say ‘A Fantastic Woman’ did, this is still an empathetic and moving portrayal of a young girl coming to terms with who she is and who she wants to be.