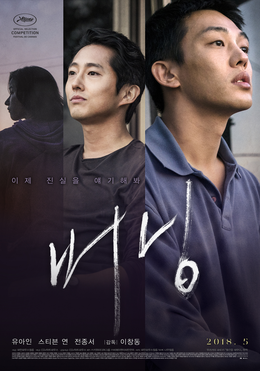 Jong-su bumps into a girl who used to live in the same neighborhood as him, who asks him to look after her cat while on a trip to Africa. When back, she introduces Ben, a mysterious guy she met there, who confesses his secret hobby.

‘Burning’, the latest film from South Korean director Lee Chang-dong, is an intense, slow burning (no pun intended!) psychological thriller about three young people who cross paths in the city of Paju, just outside Seoul. One of those people is Jong-su (Yoo Ah-in), a young working class man who performs various jobs around Paju until he is forced to return to the family farm after his father gets into a legal dispute. One day, he runs into an old neighbour and classmate called Hae-mi (Jeon Jong-seo) and they reconnect and start a brief relationship that is partially interrupted when Hae-mi goes off travelling to Africa. Jong-su awaits her return at the airport, only to find she returns with another man who she met on her travels and the three begin an awkward friendship/love triangle that develops in an unpredictable fashion.

This is a very clever film that requires your full attention to pick up on the subtle clues and references, and it slowly reveals its true purpose to the audience over time. It’s full of metaphors and hidden meanings that aren’t always clear from the outset, and the meaning of the title is cleverly woven into the plot in more ways than one. I felt that elements of the plot reminded me of Hitchcock’s classic ‘Vertigo’, with Jong-su the stand in for James Stewart as a man unsure as to whether he’s uncovered something or if he’s going mad. Jong-su is a bit of a blank slate but Yoo Ah-in makes him a character we are invested in and as the film takes a turn in the final act his prior passiveness enhances the impact. Ben (Steven Yeun) is the individual who Hae-mi brings back from Africa and he couldn’t be more different from Jong-su. He’s well-off, arrogant and confident, but clouds this in a charisma that brings people under his spell, even as Jong-su (and by extension, the audience) can tell that something is off. Yeun (best known as Glenn in ‘The Walking Dead’) is magnificent in the role and his calm demeanour at all times is deeply unsettling.

‘Burning’ is an enigmatic and absorbing movie with a masterful sense of mood and tone, and its patient approach to delivering on the mysteries it sets up is a thrilling counterpoint to the approach of most mainstream movies. I’m surprised this was overlooked for a ‘Best Foreign Language Film’ nomination at the Oscars, and moreso that a South Korean film has never been nominated for that award, but this is perhaps the best film I’ve seen this year so far and it’s well worth your time.