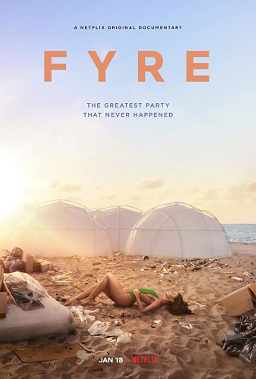 An exclusive behind the scenes look at the infamous unraveling of the Fyre music festival.

Netflix’s latest documentary attempts to tell the story surrounding the infamous Fyre Festival, a music event advertised as a luxurious island retreat that descended into chaos when it became apparent the organisers were in over their head. All of this unfolded in April 2017 and generated significant media attention at the time, and in ‘Fyre: The Greatest Party That Never Happened’, the filmmakers attempt to understand how this was allowed to happen through testimonies from various people involved.

To understand the disaster that was Fyre Festival, the film first attempts to understand Billy McFarland, the lead organiser and a supposed entrepreneur who has managed to get a whole host of people to buy into his vision, despite having nothing to back it up. McFarland is a snake oil salesman who nonetheless had high profile backers and managed to get endorsements from leading models, alongside rapper Ja Rule, who was his partner in the Fyre Festival fiasco. There are no specific interviews with McFarland or Ja Rule who only appear in archive footage so we learn about them through the people who worked with them and were in many respects as duped as the festival goers. There’s a schadenfreude-esque kind of humour in watching a bunch of rich kids get scammed but when the filmmakers show the collateral damage on local people who were never paid for their efforts it shines a light on how disgusting this endeavour truly was.

The irony is that the principles behind the festival were good and there is clearly a market for this kind of experience, shown through the excellent ticket sales, but McFarland and co had no idea how to pull it off and his deeply delusional response to the many setbacks made a bad situation worse. Blame is apportioned to the people who endorsed the festival, who were happy to take the money without understanding what they were promoting, and to this date only one of the models involved has had the remorse to issue an apology. The film branches off into a critique of the celebrity culture and modern advertising that allowed something like this to happen, but there’s comedic value in the sheer ridiculousness of how it panned out.

‘Fyre: The Greatest Party That Never Happened’ is one of the best recent Netflix documentaries, well produced with good insights that go behind the scenes of how this shambles unfolded whilst also providing valuable critique of a society that values celebrity, money and fame to the extent that a situation like Fyre Festival is able to happen, and could very well happen again.