The House That Jack Built 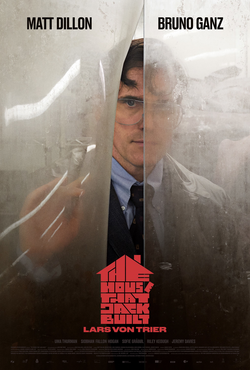 The story follows Jack, a highly intelligent serial killer, over the course of twelve years, and depicts the murders that really develop his inner madman.

After prompting Cannes walkouts and polarising audiences, Lars von Trier’s controversial latest ‘The House That Jack Built’ comes into UK cinemas, and it’s as uncompromising and button pushing as you’d expect from the provocative Dane. The film takes place over 12 years and follows a serial killer (played by Matt Dillon) as he murders various people in the US state of Washington in the 1970’s and 1980’s, exploring his crimes in graphic, gory detail. The narrative is framed around 5 specific ‘incidents’, and alongside the activity itself we hear Jack having philosophical conversations with a character played by Bruno Ganz which acts as a device to shed light on his motives and his mindset.

I found the film surprisingly funny at times and different scenes veer between comedic and downright horrific, depending on the context, with some incidents played more for absurdist comedy and others completely horrifying. I found some of the scenes particularly hard to stomach, chiefly incidents 3 and 4, which I suspect led to the walkouts. Jack is a failed architect and we can see how this bitterness manifests itself in deeply disturbing ways, and I think half of what makes this such a difficult watch is because it puts you squarely in Jack’s head, viewing each incident through him, almost making the viewer complicit in his actions. It’s a fine line between challenging filmmaking and being exploitative for the sake of seeing how far you can push the audience’s buttons and there’s definitely a part of von Trier who likes playing the provocateur, testing the limits. That being said, I found ‘The House That Jack Built’ to be completely engrossing and I felt its unsettling subject material was mostly handled well in order to dig into the darkness of the male psyche, that von Trier is setting out to explore.

If the film wasn’t so divisive then Matt Dillon would be touted for awards as he is absolutely excellent here, an unsettling presence primarily because of how calm he seems to be, even when he has close shaves with the law. ‘The House That Jack Built’ most certainly won’t be for everybody, but for anyone who enjoys challenging cinema or the darker themes that von Trier likes to explore, you’ll find this a really rewarding experience.