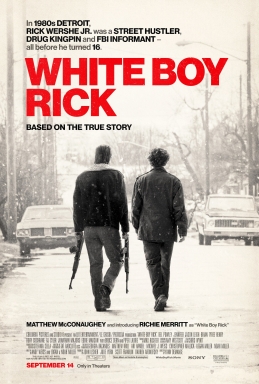 The story of teenager Richard Wershe Jr., who became an undercover informant for the FBI during the 1980s and was ultimately arrested for drug-trafficking and sentenced to life in prison.

‘White Boy Rick’ is a biographical film that tells the story of how a 14 year old became the youngest informant in FBI history, and how he was ultimately let down by a system that set him up to fail. It stars Richie Merritt as the aforementioned informant, Richard Wershe Jr. (or ‘White Boy Rick’), alongside an ensemble cast led by Matthew McConaughey as his father. The film is directed by Yann Demange, a British film director best known for the outstanding ‘71’, a superb film set during the Irish troubles, and on the back of that I have to say I found ‘White Boy Rick’ to be disappointing.

The film begins by introducing us to Rick and his family, including his dad (McConaughey) and his sister (Bel Powley), and we learn that his father is a small-time arms dealer in a run down part of Detroit. Using the knowledge he’s gained from his father, Rick sells some guns to a group of local gang members, gaining their respect and ultimately hanging around them, which leads to the FBI to come calling. There’s a good story here and it’s told reasonably well, but I struggled to immerse myself into it and I think that’s largely down to the central character. Rick’s established as the kind of teenager who generally goes with the flow and that works against the narrative, as he’s too much of a blank slate to care about the situations he finds himself in. I felt the script failed to make Rick sympathetic, not helped by Richie Merritt’s bland performance, and whilst what happens to him is an indictment of the way the US justice system uses and abuses individuals, it lacks the passion to really get you angry about it. I struggled to care about what happened to these characters and that’s a problem.

McConaughey is the standout as Rick’s father in a more nuanced role than the larger than life character’s he’s played of late, and he particularly excels as the film approaches the final act and we start to build a picture of a father who ultimately wants the best for his children despite how he may have acted in the past. Its stirring work and belongs in a better film than ‘White Boy Rick’. I did find things to enjoy here and the story is worth hearing about, but I thought this could have been a much better film than it ended up being.