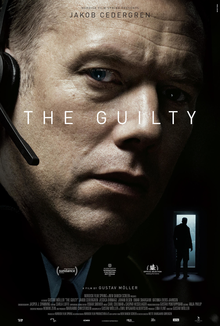 A police officer assigned alarm dispatch duty enters a race against time when he answers an emergency call from a kidnapped woman.

Danish cinema has produced some of my favourite movies of recent years and ‘The Guilty’ is another strong entry to that list, and it has been selected as the country’s entry for next year’s ‘Best Foreign Language Film’ award at the Oscar’s. The film takes place entirely in one location in an emergency dispatch call centre as we listen to the calls received by Asger (Jakob Cedergren), a police officer assigned to desk duty on account of some incident that is alluded too but not explained until a later point. After a couple of straightforward calls, Asger receives a call from a young woman who appears to have been kidnapped and he finds himself frantically trying to help her out. This is a tense race against the clock thriller, anchored by a strong lead performance from Cedergren and I was fully engrossed in it.

The film is written and directed by Gustav Möller and his script is taut, exciting and knows exactly when to drop its reveals on Asger, and by extension the audience. It’s a limited premise but the filmmakers manage to wring every ounce of tension out of the situation, and it reminded me of films such as ‘Locke’ and ‘Buried’ that also successfully navigated stories set in one location. Cedergren does a good job of making Asger feel like a fully rounded character despite virtually all of his interactions being with strangers on the phone, and I was just as interested in why he was stuck on desk duty as I was in the fate of the kidnapped woman.

‘The Guilty’ is a tense thriller, well performed and well acted, and clocking in at less than 90 minutes, it manages to maintain its intensity from the beginning right through to the end, and I was thoroughly entertained by it.