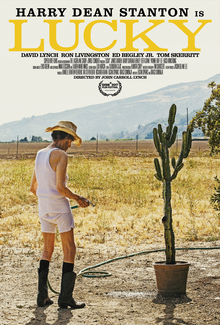 The spiritual journey of a ninety-year-old atheist.

If you have as much as a passing interest in cinema (and I’m guessing you do if you’re reading my blog!) then you’ll know who Harry Dean Stanton was and is. His name may not ring a bell but he is one of those actors who cropped up in such a wide array of films across different genres, almost always delivering a performance worth remembering in even the smallest of roles. The late, great critic Roger Ebert once stated that “no movie featuring Stanton or M. Emmet Walsh in a supporting role can be altogether bad”, a statement he stuck too with one or two (dis)honourable exceptions. Stanton was the archetypal character actor and it’s fitting (and certainly ironic!) in a way that one of his final roles is ‘Lucky’, a film where he is the undisputed lead and a film that tells a story of a man contemplating his life and its end.

His character here is ‘Lucky’, a 90 year old atheist who lives in a small desert town in California, one of those places where everyone knows one another. The film follows him as he goes through his daily routine, having conversations with the various people who he bumps into along the way, most of which act as little vignettes to tease out Lucky’s worldview and the events that made him the person he is today. The characters are quirky and colourful and there isn’t a huge deal of plot (unless you count the case of an escaped pet tortoise!) but there is more to this film than just being an offbeat little indie and I felt it was wonderfully understated as it explored its themes. It’s a film about morality, growing old and coming to terms with death, and Stanton’s expressiveness as an actor helps us understand exactly what he’s feeling and thinking at any given time.

‘Lucky’ is a perfect swansong for Harry Dean Stanton and I thought it was an excellent, moving piece of work. One for all cinephiles and Stanton fans to seek out.