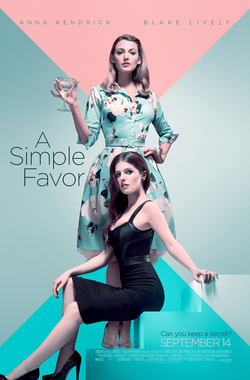 A woman seeks to uncover the truth behind the disappearance of her best friend.

Some films are particularly hard to write about and ‘A Simple Favour’ is one of them, a genre hopping delight that jumps between murder mystery, satire and broad comedy, often within the space of one scene. The loose premise centres on the disappearance of Emily Nelson (Blake Lively), a successful PR director who goes missing, leaving her husband (Henry Golding), son and ‘best friend’ (Anna Kendrick) in the dark. We follow this story through Stephanie (Kendrick), a widowed single mother who runs a vlog where she shares recipes and tips with other mothers, as she sets off on her own investigation, naturally sharing every detail with her ‘fans’ as people are wont to do these days. The film is directed by Paul Feig who is best known for his numerous collaborations with Melissa McCarthy, and his comedic talents work as a perfect counterbalance to a narrative that burns through plot at a rate of knots.

The film is delightfully twisted and keeps the audience guessing with numerous fake outs and twists and turns, and it’s anchored by a couple of really great performances from Kendrick and Lively. Kendrick is a delight in most performances and it’s clear she relishes the opportunity to get her teeth into Stephanie, a character that suits her persona whilst adding a devilish edge. Alongside her, Lively gives arguably the performance of her career as the high powered Emily, who takes Stephanie under her wing with her unorthodox style of parenting and general approach to life. Both actresses play off one another superbly and as the stakes get higher the performances continue to excel. The narrative is tonally all over the place and you will have to suspend your disbelief at some of the plot developments, but when the film is such terrific fun it’s easy to gloss over and ‘A Simple Favour’ is really good fun.

‘A Simple Favour’ is a funny, sharp movie with terrific lead performances from Anna Kendrick and Blake Lively, and whilst it is undoubtedly all over the place at times, enough of the elements stick for it to work for me and I really enjoyed it.