In the Fade (Aus dem Nichts) 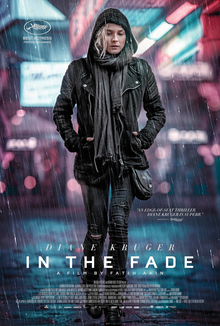 Katja’s life collapses after the death of her husband and son in a bomb attack. After a time of mourning and injustice, Katja seeks revenge.

This year’s Golden Globe winner for ‘Best Foreign Language Film’ is a tense, politically charged thriller from Fatih Akin, a German director of Turkish descent. It’s a film that tackles the consequences of far right extremism through the character of Katja (Diane Kruger in a career best and award winning performance), a German women who we meet shortly before her Turkish husband and son are the victims of a deadly nail bomb attack. The film moves between genres, not always seamlessly, as we begin with a tragedy before moving into courtroom drama and then a revenge thriller, but it’s never less than gripping in large part down to Kruger’s powerhouse performance.

‘In the Fade’ burns with purposeful anger that only intensifies in the second act as the courtroom setting brings us face to face with the two people accused of murdering Katja’s family. This part of the film is the strongest, even as it sometimes lacks subtlety and requires a leap of faith on the audience’s part to get the pieces in place for the final act. I felt the home video footage that begins each segment worked well and helped to drive home the tragedy as it depicts a seemingly ordinary family enjoying each other’s company, and as Katja watches on this intensifies her feelings of loss. Kruger has always been a capable actress (her work in the US TV version of ‘The Bridge’ is particularly stellar), but this is perhaps her first leading cinematic role that she’s really been able to get her teeth into. Her Katja is flawed and damaged but she never pretends to be anything else and Kruger’s performance is the glue that holds the different parts of the film together. She is angry, grief-stricken and in deep pain and Kruger makes every facet of her coming to terms with the situation deeply compelling.

Akin attempts to show us a world where the prejudices people hold impact on their ability to be impartial and where there is no real justice or satisfaction to be had, even in revenge. It’s partly successful in this and I was never less than gripped by ‘In the Fade’, an intense piece of cinema that is held together by Kruger even as it veers tonally from serious drama to pulpy revenge thriller.