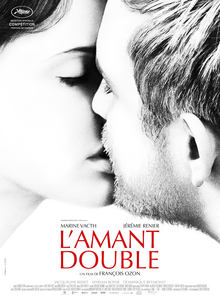 Chloé, a fragile young woman, falls in love with her psychoanalyst, Paul. A few months later she moves in with him, but soon discovers that her lover is concealing a part of his identity.

The latest film from the prolific French director François Ozon is a psychosexual thriller about a young woman (Marine Vacth) who discovers the man she is dating is concealing the existence of a twin brother. It’s a film that sets out to provoke from the outset (it starts with a close up shot of the main character’s vagina, so it’s not exactly subtle!) and it achieves that with some gruesome imagery and taboo busting plot developments. I found it more akin to a trashy 80s American erotic thriller than what I’ve come to expect from traditional French fare, but I did enjoy it even as many elements don’t quite come together as I’m sure Ozon intended.

Our protagonist is Chloe (Vacth), a troubled young woman who is referred to a psychologist called Paul (Jeremie Renier), who she subsequently falls in love with. Their relationship moves along smoothly until she discovers that Paul has failed to mention his twin brother Louis, who is also a psychologist, and her decision to pay him a visit leads to something more. Jeremie Renier is superb in the dual role, crafting two similar but distinct characters as he embodies both the sweet, caring nature of Paul and the masochistic mindset of Louis. Chloe is both repulsed and turned on by Louis and the film plays with convention as she spins her own web of lies in reaction to Paul keeping Louis’s presence a secret. The film ventures into horror territory in the final act and there were certain moments that I found scarier than anything in a traditional horror film where Ozon’s skills as a director come to the fore.

I thought the ending was unsatisfying and to a certain extent the narrative ran away from Ozon as we approached the conclusion. The film has good performances and kept me guessing throughout but it’s more interested in building suspense than in crafting a story and I felt it started to fall apart, and ultimately, I thought ‘L’Amant Double’ was fun but disposable.