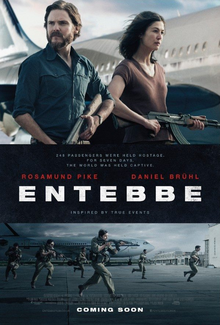 Inspired by the true events of the 1976 hijacking of an Air France flight en route from Tel Aviv to Paris, and the most daring rescue mission ever attempted.

Based on the real-life hijacking and subsequent rescue attempt of an Air France flight carrying mainly Israeli and French passengers in 1976, ‘Entebbe’ is a film that tells the story of the situation from the perspectives of the key people involved. It begins by following the hijackers, two German (Daniel Bruhl, Rosamund Pike) and two Palestinian, who carry out the hijacking and take the passengers hostage in order to demand a large ransom and the release of several Palestinian prisoners from the Israeli government. I hadn’t heard of the story beforehand and it carries a lot of intrigue, especially the geopolitical elements that come into play as the hijacked plane and the hostages are taken to Entebbe airport in Uganda, at the time under the control of Idi Amin (played here by Nonso Anozie).

The story of ‘Entebbe’ should be straightforward to tell, but the filmmakers do bungle it somewhat through some unusual stylistic choices that don’t really work. The hostage situation is never as tense or as exciting as it should be and I spent much of the film waiting for the thrilling rescue attempt, only for the filmmakers to make a mess of that as well. The failure to make such a daring fact-based rescue exciting cannot be explained without mentioning the utterly bizarre decision to introduce sporadic bursts of modern dance throughout, which neither works thematically or narratively. The raid itself is crosscut with a dance sequence and is also shot in infuriating slow motion, and what should have been the film’s centrepiece becomes a complete mess, fatally undermining the film as a whole. There are strong moments scattered throughout and I did particularly like the sequences involving the Israeli government and military attempting to negotiate before preparing for the rescue mission, with Eddie Marsan and Lior Ashkenazi compelling as Shimon Peres and Yitzhak Rabin.

I didn’t get anything out of ‘Entebbe’ that a documentary couldn’t tell me, which is a failure on the part of the filmmakers, but the story is interesting and I have to say I did enjoy the film overall.