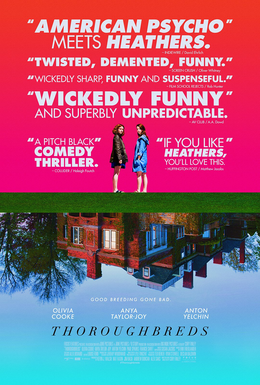 Two upper-class teenage girls in suburban Connecticut rekindle their unlikely friendship after years of growing apart. Together, they hatch a plan to solve both of their problems-no matter what the cost.

One of the hits from last year’s Sundance film festival, ‘Thoroughbreds’ is a confident debut feature from Cory Finley about two teenagers who plot together to kill one of their stepfathers. It’s essentially a two hander that allows two talented young actresses (Olivia Cooke and Anya Taylor-Joy) the chance to shine, and they grab that opportunity with both hands. The film is often meandering and does feel like a collection of ideas rather than a whole, but the strong performances and an off-kilter approach to the filmmaking make ‘Thoroughbreds’ at the very least, an interesting watch.

Taylor-Joy plays Lily, an intelligent teenager from a privileged background who lives in a big house with her mother and stepdad Mark (Paul Sparks). She spends most of her time wandering around this big house, in barely concealed conflict with Mark, when she reconnects with Amanda (Cooke), an old friend who has been distanced from other teenagers on account of her displaying sociopathic tendencies. Olivia Cooke usually plays sweet and innocent love interests (‘Me and Earl and the Dying Girl’ and TV’s ‘Bates Motel’) but she’s completely different here as the cold and detached Amanda, and it’s a thrilling performance. This is also the last film to star the late Anton Yelchin, and he delivers a good performance here as a skeezy drug dealer who gets drawn into Lily and Amanda’s orbit. The film has an oddly unnerving sound design and director Cory Finley builds on this through his filmmaking style, often making unusual choices in how to shoot key sequences that don’t always work.

I think part of what prevented me from being fully taken by ‘Thoroughbreds’ was that the material left me feeling as cold and detached as Amanda, and I felt the occasionally clinical style difficult to fully get on board with. Nonetheless, ‘Thoroughbreds’ is a solid debut feature from Cory Finley and whilst the performances from Taylor-Joy and Cooke are superb, it’s a film I admired more than I enjoyed.