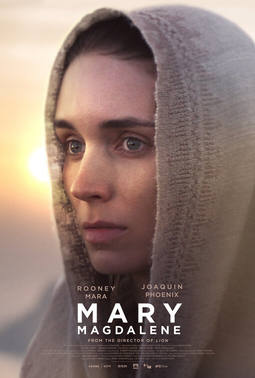 Set in the Holy Land in the first century C.E., a young woman leaves her small fishing village and traditional family behind to join a radical new social movement. At its head is a charismatic leader, Jesus of Nazareth, who promises that the world is changing. Mary is searching for a new way of living, and an authenticity that is denied her by the rigid hierarchies of the day. As the notoriety of the group spread and more are drawn to follow Jesus’ inspirational message, Mary’s spiritual journey places her at the heart of a story that will lead to the capital city of Jerusalem, where she must confront the reality of Jesus’ destiny and her own place within it.

The story of Jesus Christ has been told on screen on countless occasions, but I’m struggling to recall a version as dull as ‘Mary Magdalene’, which sets out to tell the story from her point of view. A lot of the material in the press from the filmmakers and cast has spoken about the film setting out to tell the true story of Mary Magdalene, whose reputation has been tarnished over the years for her part in Jesus’s story. It’s solid enough reasoning but somewhere along the way the filmmakers have forgotten to make the story into entertaining, or even interesting, cinema in their quest to tell the truth, and I thought this was a really, really boring watch that had me checking my watch regularly throughout.

Most people, religious or not, will know the story of Jesus, and ‘Mary Magdalene’ attempts to retell it from a female perspective, joining up with Mary (Rooney Mara) shortly before she meets Jesus and joins him and his disciples as they head for Jerusalem. For a film carrying her name it’s perhaps surprising how little Mary Magdalene features, spending much of the film on the sidelines particularly once Jesus comes into play. Rooney Mara is a good actress but the material is so thin here that given the filmmakers aims, it’s odd that she has so little to work with. We get more of a sense of character with Tahar Rahim’s Judas, whose rationale for his betrayal is nicely reasoned out, or Jesus (Joaquin Phoenix) himself, who starts to dominate the film in the latter stages. It’s lovely to look at and the rugged beauty of Southern Italy where the film was shot comes to the fore, but the material is delivered in such a dull, dramatically inert fashion that I was never remotely engaged in any of it.

‘Mary Magdalene’ is a bold attempt to tell a familiar story from a different perspective, but director Garth Davis, whose last film was the vastly superior ‘Lion’, never gets a handle on the material and I thought this was a sluggish, tedious movie.